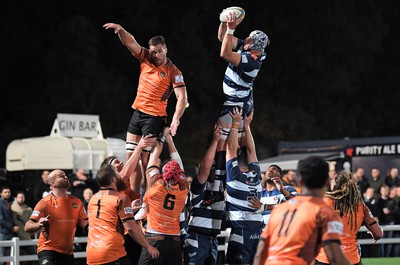 Ealing Trailfinders made it three wins from three in the Championship Cup after a hard-fought 22-17 victory over Coventry at Butt’s Park Arena.

Ben Ward’s side were made to work extremely hard to leave the Midlands with the win, and showed enormous character in the final quarter to ensure that they took control of the pool with another crucial win.

The West Londoners came flying out of the blocks and immediately looked comfortable on the new 4G surface that Coventry have installed, which showed with a try from Kieran Murphy after just six minutes.

A scrum deep in the Coventry 22 gave the Trailfinders the perfect platform and after building towards the line, Murphy used his powerful in emphatic style to open the scoring. Steven Shingler added the conversion to give his side a seven point lead.

That lead was extended just three minutes later with another try to stun the home crowd. Shingler’s flat pass over the top of the defence released Sam Dickinson down the wing, and the Club Captain drew in the final defender to allow James Cordy Redden a clear run to the line from 20 metres. The conversion went narrowly wide, but the visitors were looking in imperious form with just 10 minutes on the clock.

The hosts then responded immediately with a try of their own to add to what had been an eventful opening quarter. A penalty was kicked to the corner, and the rolling maul rampaged to the line before Scott Tolmie broke away to score which cut the lead to seven points.

A number of chances then passed by for the Trailfinders who were looking to regain control of the match ahead of half time. Craig Hampson’s grubber ahead had Pat Howard chasing after it but the bounce of the ball beat everyone.

Kieran Murphy then looked to have scored his second try as he stretched out to dot the ball down, but the referee judged that he had been held up over the line.

The lead grew to 10 points after 35 minutes as Steven Shingler’s penalty sailed through the posts, but it would be Coventry who headed in to the break with the momentum as they scored with the final play of the half.

Rory Jennings’ cross field kick was gathered by Rob Knox who towered above the defence to score in the corner and send his side down the tunnel trailing by five points at half time.

The Trailfinders made the perfect start to the second half to gave themselves breathing space with a try from Rayn Smid after just two minutes. Sam Dickinson went flying through a gap in the defence but was hauled down just a metre from the line, and when the ball was recycled Smid was on hand to bundle over the line. Shingler’s conversion was successful, extending the advantage to 12 points.

The play was then dominated by the visitors who had their eyes on the four-ty bonus point, but they were continuously frustrated as the chances weren’t converted. Craig Hampson dotted the ball down from inches away and cued the celebrations, however a double movement once again saw the hosts survive.

Coventry then got back in to the game with 15 minutes remaining to see the home supporters erupt. A long looping pass was intercepted and James Stokes went the length of the field to dive under the posts, before Will Maisey’s conversion cut the lead to just five points.

The Green and Whites then utilised the bench and were forced to use all of their character as the defence held firm, and with just seconds left they smashed the ball in to the stands to confirm an impressive win on the road.