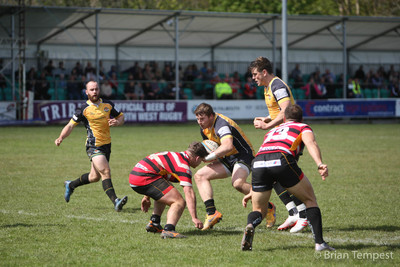 Ealing Trailfinders ended the Championship season with a 39-25 defeat after a late rally from Cornish Pirates gave them the victory in a bad-tempered match at Mennaye Field which featured five yellow cards.

The West Londoners scored four tries and had the lead until the hour mark, but the hosts scored 24 points in the final quarter to secure the win in the final match of the league campaign.

Laurence May gave the Pirates an early lead with a penalty after five minutes to put them 3-0 ahead, but the Trailfinders responded with a number by creating a number of opportunities to go in front.

Dan Grant Adamson dummied at the base of a lineout and went racing ahead but was hauled down just short. The referee then penalised the Pirates three times in a row before sending Christian Judge to the sin-bin, and from the resulting phase Ollie Stedman powered his way over the line for the first try of the match.

Peter Lydon then extended the lead to five points with a penalty from 30 metres, but after Will Davis was sent to the sin-bin the Pirates brought themselves level with a try from Tom Duncan who took a quick tap from close range and scored.

It looked as if the sides would go down the tunnel at the break with the scores level, but another try from Ollie Stedman with the last play of the half edged Ben Ward’s men ahead. The number eight got the ball inside the Pirates 22 and shrugged off three defenders to race over the line in impressive style. Lydon’s conversion put the Trailfinders 15-8 in front at half time.

The match then burst in to life in the second half as both side looked to sign off the league season in style.

Pirates came out of the blocks flying and got level with a try from Chris Morgan who drove over from close range, before May’s conversion made it 15-15.

Mark Bright then scored an outstanding try to give the Trailfinders the lead again. Seb Stegmann and James Cordy Redden combined well on the wing, before offloading inside to the captain who ran to the line unattended.

The Vallis Way outfit then had a number of chances to give themselves some breathing space but failed to capitalise on them, which was followed by a Pirates revival as they took control of the match.

A penalty try saw them take the lead on the hour mark as Will Harries was sent to the sin bin, and then straight from the re-start they went down the other end as Alex O’Meara dotted down in the corner with an overlap on the right wing. May’s touchline conversion put the hosts 29-20 ahead with 15 minutes remaining.

Rayn Smid then brought the Trailfinders back in to the match with the bonus point try, as Bright made a break and drew in the final defender before passing to the South African who ran clear from just outside the 22 to cut the deficit to four points.

Ollie Curry and Brett Beukeboom were then both sent to the sin bin for an off the ball incident, and from the resulting penalty May kicked the Pirates in to a 32-25 lead.

Lewis Robling then made a line break as he looked to bring his side level, but the Pirates kept hold of the ball in the closing stages before sealing the victory with a second try from Alex O’Meara in the same corner to give the home supporters something to celebrate in the Penzance sun.

The Trailfinders end the Championship season in second after an outstanding league campaign, and have the British and Irish Cup Final at Vallis Way in a fortnight as they look to end 2017/18 with some silverware.