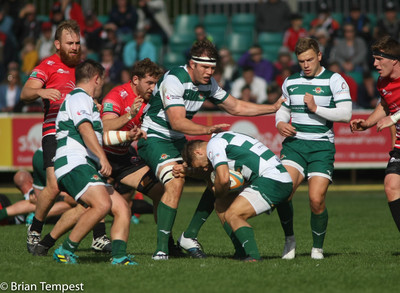 Ealing Trailfinders suffered a disappointing defeat on the opening day of the Greene King IPA Championship season as they fell 30-10 to Cornish Pirates at Mennaye Field.

The West Londoners were uncharacteristically lethargic throughout and failed to live up to their previous performances in the Cup, being beaten by a dominant Pirates side who never looked like surrendering their lead.

The hosts started strongly and took the lead inside the first 10 minutes with a try from Maliq Holden. A penalty from Javier Rojas Alvarez came back off the post but after the ball was cleared it fell in to the hands of Fa’atiga Lemalu who smashed his way through the defence and he had Holden on his shoulder who had a clear run to the line.

Their fast start continued with another try just four minutes later to the delight of the home supporters. On the counter attack they grubbered the ball through, and it bounced up perfectly for Nicolas De Battista who dotted the ball down. Alvarez’s conversion put his side 12-0 in front after just 12 minutes.

The Trailfinders then created a number of chances as they looked to get back in to the match, but they lacked the finishing prowess which is normally so firmly associated with them and the opportunities were missed.

Alun Walker and Rayn Smid combined in the midfield and set Kieran Murphy free just outside the 22, however the final pass to Nathan Fowles went forward to allow the Pirates to escape.

Jack Tovey then created space for Smid again as Jordy Reid carried past a number of defenders, but a fumble gave the hosts the scrum.

Alvarez increased the Pirates’ lead to 15 points on the 20 minute mark with a penalty which saw Craig Willis sent to the sin-bin as the afternoon got even tougher for the Trailfinders.

David Johnston got the Green and Whites on the scoreboard with a penalty from 40 metres as they looked for some reward, but a huge setback saw the Pirates cross the try-line in the final play of the first half to increase their advantage.

They continued to look dangerous with ball in hand, and a break deep in the 22 allowed Brett Beukeboom to bundle his way over, followed by Alvarez adding the extras to give his side a 22-3 lead at the break.

The Trailfinders came flying out of the blocks in the second half and increased the intensity significantly as they started to make crucial metres, however despite coming close on a number of occasions there was to be more frustration with Alvarez kicking another penalty to take the hosts’ lead up to 22 points.

Then a series of scrums deep in the Pirates 22 which included a whole host of penalties seemed to be getting the visitors some joy and a penalty try seemed inevitable, but they managed to hack the ball away as it spat out of the side to keep their try-line intact.

Jordan Burns then created a piece of magic with a sensational individual try to give the visitors some hope. The scrum-half picked up the ball from the base of a ruck and sniped his way past four defenders from 50 metres out to race over the line. Steven Shingler’s conversion cut the lead to 15 points with 15 minutes remaining in the Penzance sunshine.

As the Trailfinders began to chase the game with an eye on a memorable comeback, it was the Pirates who were next on the scoreboard to confirm their opening day win. A penalty was kicked to touch, and the rolling maul rumbled towards the line which allowed Calum Patterson to break away and score.

That proved to be the last try of the match and despite plenty of endeavour the Trailfinders were unable to break what was an impressive home defence, as the ball was smashed in to the stands to give the Pirates a bonus-point win.

Ben Ward’s men now face Jersey Reds next Saturday in their first home match of the league campaign as they look for a big response to a frustrating afternoon in Cornwall.