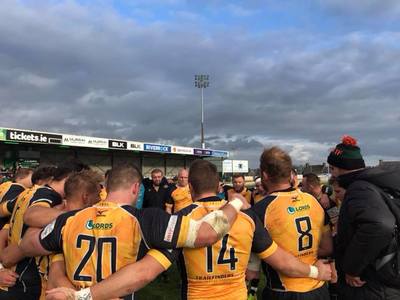 Ealing Trailfinders produced an outstanding display to record a comprehensive 71-14 victory over Connacht Eagles at the Sports Ground.

The West Londoners were full of intensity throughout and scored 11 tries in what was arguably their most impressive attacking display of the season so far. James Cordy Redden crossed for a hat-trick, whilst Lewis Jones and Will Harries both registered doubles.

The result leaves Ben Ward’s side top of the pool after the opening two rounds of the British and Irish Cup, recording two bonus point wins which has given them the maximum 10 points.

It was Connacht who were quicker out of the blocks and looked dangerous with ball in hand, but after absorbing the pressure it was the visitors who struck first and never looked back.

Sam Rodman opened the scoring on the seven minute mark with a try from a rolling maul after the forwards powered towards the line to give the Trailfinders an early lead.

Five minutes later James Cordy Redden scored his first of the afternoon to extend the advantage. After sustained pressure in the 22, Dan Temm broke the line of defence before offloading to the winger who ran over the line unattended. Shane O’Leary converted, and would kick eight out of 11 conversions in an impressive performance against his former club.

The third try came on the 25 minute mark, with Matt Cornish throwing in to the lineout before gathering the ball at the back of the maul to dot down and give his side a 19-0 lead.

Lewis Jones then scored two tries in quick succession to secure the try bonus point. The first one was a contender for try of the season with Joe Munro making a huge carry in the midfield before an audacious offload set Jones free. He then showed great pace to race away from the defenders to score under the posts.

His second score just minutes later saw him join a rolling maul and find himself with the ball in his hands as it was driving over the line to move the lead to 33-0.

There was time for one more try before the break, with Jones’ centre partner Munro crossing for a deserved try. Again the rolling maul which had been a successful weapon for the West Londoners was driving towards the line, and Munro broke away from close range to score. O’Leary converted to give Ealing a 40-0 lead at half time, in an opening 40 minutes where they had scored on every visit to the Connacht 22.

The second half started in similar fashion, with Will Harries taking just two minutes to score his first of the match. Luke Daniels broke down the left wing, before the ball was recycled and O’Leary’s inch-perfect cross kick found the Welsh winger who had acres of space to score in the corner.

The next try was also up there with the tries of the season so far. Under pressure on their own try-line, O’Leary dummied and ran out of the 22 before releasing Harries to race in to the Connacht half. Despite being hauled down, the ball came back to O’Leary again who put in another cross kick to Cordy Redden who gathered and dotted the ball down.

Connacht then responded and were rewarded for their endeavour with two tries in quick succession to put themselves on the scoreboard. Pat O’Toole scored their first, before Gavin Thornbury ran through some tackles to cut the deficit to 14-52.

Harries got his second to make it two braces in consecutive weeks on the hour mark. Ealing made their way up to the line, and patiently went through the phases before going wide where Harries was the beneficiary on an overlap.

Morgan Allen then brought up the 60 point tally with a try on his debut. The Welsh number eight certainly made his presence felt after coming off the bench, and was rewarded by driving over the line from close range to take the lead up to 66-14.

With time up the backs were refusing to kick the ball out in search of an eleventh try, and were rewarded with Cordy Redden completing his hat trick in the final play of the match. Jones kicked clear from their 22, and the winger won the footrace to gather on the line and dive over to make the final score 71-14 on a memorable afternoon at the Sports Ground.

That concludes the opening fortnight of the British and Irish Cup, with the Greene King IPA Championship resuming this weekend and a trip to Clifton Lane to take on Rotherham Titans on Saturday afternoon.