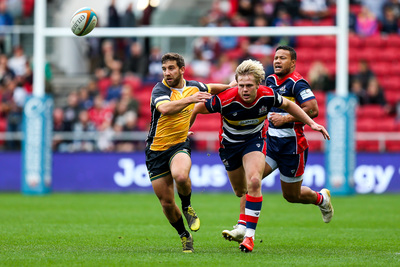 Ben Ward’s side were dominant throughout in the set-piece and can feel extremely hard done-by to leave the West Country with nothing, after being denied a losing bonus-point with the last kick of the match.

The signs looked ominous early on with Ross McMillan opening the scoring for the hosts after just four minutes. A penalty was kicked to the corner, and the hooker drove over the line from the rolling maul to give Pat Lam’s side a 7-0 lead after Billy Searle’s conversion.

Peter Lydon, who was 100% from the tee throughout the match kicked his first penalty to cut the deficit to 7-3, but Searle responded with a penalty of his own to edge his team 10-3 in front.

Bristol, who looked to be in control of the match in the early stages scored their second try on the 15 minute mark. A neat play from the back of a scrum which saw Tom Varndell racing down the wing puzzled the Trailfinders’ defence, and the former England winger passed inside to Alapati Leiua who dived over the line in the corner. The conversion went wide, but Bristol held what looked to be a commanding 15-3 advantage.

From then on it was Ealing who had the majority of the possession and territory as they looked for a way back in to the match.

Luke Carter went within inches of scoring straight from the re-start but was denied by the television match official. A turnover gave Piers O’Conor loose ball in the midfield, and he stepped his way towards the line before offloading to Carter who was held up over the line by a number of Bristol defenders.

After a number of penalties at scrum-time the away side were continuously kicking the ball in to the corner, and it paid off just before the half-hour with Will Davis driving over the line. Sustained pressure in the 22 meant that the forwards were edging towards the line, and the former Bristol prop had enough power to bundle over from close range. Lydon converted and cut the deficit to 15-10.

Another successful penalty from Lydon meant that it appeared Ealing would head down the tunnel trailing by just two points, but a try right on half time meant that Bristol wrestled back control of the match.

Searle dummied in the midfield just outside the 22, and had All Black Steven Luatua on his inside shoulder who raced under the posts to give them a 22-13 half time advantage.

Nicky Thomas was sent to the sin-bin for the hosts just after the break after repeated infringements at the scrum, and Ealing capitalised straight away with a try from Alun Walker.

The scrum penalty was kicked to the corner, and from the lineout a rolling maul steered towards the line, allowing the Scottish hooker to dot down for the fourth match in a row. Lydon converted and cut the gap to just two points.

Another yellow card followed for Bristol with Max Crumpton shown his marching orders for a dangerous tackle, which meant that momentarily the hosts were down to just 13 men.

Piers O’Conor thought he’d scored after intercepting from 50 metres and racing clear to dive jubilantly under the posts, but play was called back for an earlier knock-on to cut short the celebrations.

Another penalty followed on 62 minutes, and Lydon stepped up from 45 metres to kick his team in to an impressive 23-22 lead.

The West Londoners were putting in a monumental defensive effort as they chased what would be a memorable victory, but a moment of brilliance with five minutes remaining proved to be the difference.

Matt Protheroe gathered the ball inside his half and set off on a run which saw him step a number of defenders and eventually offload to Rhodri Williams, who had a clear run to the try-line and allowed the 7,170 inside Ashton Gate a huge sigh of relief.

Searle converted to give Bristol a 29-23 lead, but Ealing refused to lie down and pushed for the winning try. They had plenty of possession but were unable to create a match winning moment and were penalised with 79 minutes on the clock.

Searle lined up the kick and was successful, agonisingly denying Ealing a losing bonus-point, for a performance which deserved a huge amount more but left the travelling supporters bursting with pride.