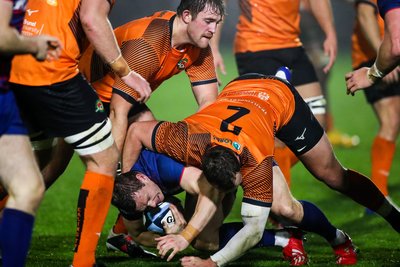 Ealing Trailfinders continued their impressive pre-season form with an emphatic 38-10 victory over Bristol Bears ‘A’ at their High Performance Centre.

The West Londoners scored six tries in total in tricky conditions as they eventually ground down their opponents in the second half.

Ben Ward’s side got off to a flying start and opened the scoring inside the first minute to stamp their authority on the match. A penalty straight from kick off allowed Steven Shingler to kick to the corner, and from the rolling maul Michael Van Vuuren powered over to give his side the lead. Shingler’s touchline conversion extended the lead to 7-0.

The Bears responded well and grew in to the game for the remainder of the first quarter. Tom Wilstead kicked a penalty to bring them within four points, and then they went in front with 15 minutes on the clock.

After going through the phases in the 22, a looping pass out wide found Toby Fricker in the corner who dived over the line from close range. The conversion from Wilstead put them 10-7 ahead.

Luke Daniels then marked his second debut with a trademark run as he danced through a number of defenders and entered the 22, but he was eventually hauled down and the Bears survived.

That pressure then paid off five minutes later, as Michael Van Vuuren's second try restored the lead with 20 minutes gone. In similar style to the first try, a penalty was kicked to the corner and from the rolling maul the hooker was able to dot the ball down from the base.

Levi Davis then scored two tries in as many minutes as he sparked in to life. Some phase play down the short side built the Trailfinders towards the line, and then quick hands gave Davis some space and he stepped past the last defender to show his finishing instinct. Shingler added the extras as the lead grew to 19-10.

Then straight from the restart Shingler saw some space in the backfield and kicked ahead, and Davis then showed incredible pace from the half way line to hunt the ball down and gather it just in time slide over. The conversion went just wide, but two moments of brilliance suddenly gave the Trailfinders a 24-10 lead at the break,

It was a scrappy start to the second half as the conditions became tougher with the fog, and it was the Bears who enjoyed the most of the possession in the early stages.

They came within inches of a try as they put the pressure on deep in the 22 which resulted in a sin-bin for Will Davis, but the defence held firm which showed immense character from the squad.

Dave Johnston then put the result beyond doubt with a try on the hour mark. Daniels carried to within a metre of the line, and the ball was quickly recycled to Johnston who was in acres of space and strolled over. Shingler’s conversion took the Trailfinders over the 30 point mark.

The bench then got their opportunity including four members of the Trailfinders Rugby Academy as Taine Wagstaff, Ewan Fenley, Reuben Knight and Declan Raubenheimer all came on to add their impact.

It got even better for the Trailfinders with just seconds remaining, as Fenley rounded off the win with a try on his debut. The scrum-half saw a gap in the defence and dummied his way to the line, which was met with huge applause from the entire squad. Declan Raubenheimer scored his first points for the club as he added the conversion, confirming an impressive 38-10 win.

The Bears travel to London for the second leg on Saturday 5th December, and we will be announcing our plans regarding supporters in the early stages of the week.