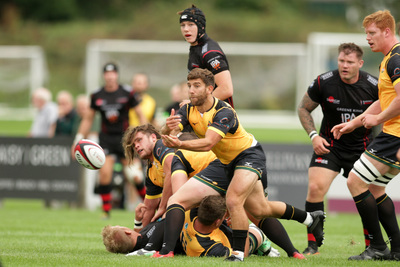 Ealing Trailfinders continued their preparations for the 2018/19 season with a confidence boosting 45-21 victory over Blackheath at Well Hall.

Ben Ward’s men scored seven tries in total and will be particularly pleased with a rampant first half display which saw them race in to a 33-0 lead before allowing the hosts back in to the match once the game opened up in the second half.

The West Londoners got off to the perfect start with a try from Howard Packman after just two minutes. A penalty was kicked to the corner and with a maul powering towards the line, Luke Carter popped the ball up to the winger who was able to dive over just 120 seconds in to his debut for the club, giving them a 5-0 advantage.

Sam Dickinson then extended the lead on the 10 minute mark with a superb score. From another lineout Luke Carter and Pat Howard combined to take the Trailfinders in to the 22, and a disguised pop pass allowed the captain to run under the posts unattended. Craig Willis converted, with an already encouraging 12-0 lead on the scoreboard.

The third try followed just two minutes later with Rayn Smid adding his name to the score sheet. Dave Johnston’s smart grubber kick bounced up for Will Harries on the wing, and the Welshman drew in the final defenders before passing inside to Smid who raced away from 30 metres to score. Willis again added the extras after a first 15 minutes of huge intensity.

Dave Johnston, who made an impressive start to the match then came within inches of adding a fourth. The former Munster man pounced on Jordy Reid’s offload and dummied which cut the Blackheath defence in half, but he was hauled down just two metres short of the line and a turnover followed.

Alun Walker then got the fourth try with 23 minutes on the clock. A penalty was kicked to the corner, and in trademark fashion the Scot was at the base of the maul to bundle over the line. Willis again converted to extend the lead to 26 points.

Jordy Reid then marked his debut with a five pointer in the closing stages of the first half. The Trailfinders were taking advantage of the hosts’ poor discipline, with another penalty kicked to the corner. Carter and Walker ran from the lineout to create the space, and the Australian smashed his way past the final defender to score. Willis converted, giving his side a 33-0 advantage with as many minutes on the clock.

The half time whistle shortly followed Reid’s try, and the West Londoners went back to the changing rooms after an impressive opening first 40 minutes with an emphatic lead at Well Hall.

The Trailfinders returned for the second half with a new look side as the rest of the squad got their opportunity and they showed no immediate signs of easing off.

Segundo Tuculet got his first try for the club 10 minutes in to the second half courtesy of an interception. A looping pass was dropped and fell in to the hands of the Argentinian international who sprinted away from the half way line to score under the posts. Willis converted, and brought up the 40 point mark in the process.

Blackheath then rallied and dominated the final quarter of the match. With the game opening up both sides were playing ambitious rugby, and after a break in the midfield a looping pass found winger Craig Dowsett who was on hand to score. Joe Tarrant converted to make the score 7-40 with 20 minutes remaining.

Another try for Blackheath then cut the deficit further as the hosts looked to make the most of their momentum. The Trailfinders were leaking penalties, and with the ball taken right up to the line flanker Freddie Owen was able to stretch over to dot down.

Markus Burnham then pounced on a dropped ball for their third try as the centre ran clear from half way, with the conversion from Tarrant bringing up the 20 point mark for the hosts.

The scoring was rounded off with the Trailfinders going over the line for their seventh try thanks to another from Segundo Tuculet. With the final play of the match a scrum deep in the Blackheath 22 gave the West Londoners the perfect platform, and Ryan Foley drew in the final defender before passing to Tuculet on the wing.

Ben Ward’s men will take a number of positives from the win at Well Hall, with another big test ahead when they travel to the Twickenham Stoop to take on Harlequins next weekend.