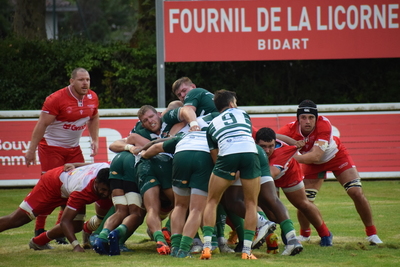 It was always going to be a tough match, with the hosts competing in the Top 14 only last year and playing in their final preseason game before their 2022/23 campaign starts next week.

Despite all of this, the Green and Whites started strongly. A knock-on saw an early scrum which allowed Simon Uzokwe to make some considerable distance off the back of it. Quick phases put Biarritz on the back foot and Craig Hampson managed to sneak through a gap at the ruck to score from 20m out. Steven Shingler slotted the conversion from directly in front of the posts.

The hosts did not take long to respond, winning back-to-back penalties to make their way up the pitch before eventually dotting down from a maul 7m out. The extras were added and after 15 minute it was 7-7.

The next 10 minutes were mainly played between 22s. After a long passage of play Biarritz eventually managed to force the ball wide to Henry Speight and the Wallaby was able to force his way over. The conversion was missed and the score was Biarritz 12-7 Ealing Trailfinders.

Biarritz kept their momentum up and looked as if they were going to score another only minutes later. They were camped five metres out, trying to find a way through but new signing Carlo Tizzano popped up with an impressive turnover to relieve the pressure.

With the half-time whistle beckoning, it appeared as if neither side would trouble the scoreboard before the break. Alun Walker had other ideas. The hooker was on the back of a strong rolling maul and managed to barge over with the clock in the red. Shingler added the extras and Ealing led 14-12 at the break.

Over the interval the conditions worsened as spots of rain began to make an appearance. This didn’t effect the West Londoners however as within a minute of the restart they were already camped on the Biarritz line. Repeated penalties forced the hosts to go down a man, but despite the dominance, Ealing were unable to get over.

Most of the second half then became disjointed as both sides struggled to build any meaningful momentum. It was only with just under 15 minutes to go that Biarritz managed to score again and it came from a well worked cross-field kick which despite his best efforts, Jonah Holmes was unable to keep out. The conversion from out wide was added after bouncing off the post.

In the hostile atmosphere of Biarritz some teams may have struggled to come back, but this wasn’t the case for Ealing. A quickly forced penalty from the restart allowed Dan Lancaster to kick to the corner. This unleashed a delicious set piece move with put Jack Metcalf underneath the sticks with his first touch of the ball in Green and White. Lancaster converted to put Ealing 21-19 ahead with a nervy seven minutes remaining.

Biarritz promptly upped their attacking speed but Trailfinders had done well to counteract this. It was only with 30 seconds left that Jack Digby went fractionally too high in the tackle. The back-row was sent to the bin and it allowed Brett Herron a chance to slot a penalty from 50m out to win the game.

The whole stadium held their breath as the ball crept over the bar by a matter of inches and Ealing came just up just short in their first runout of the season.