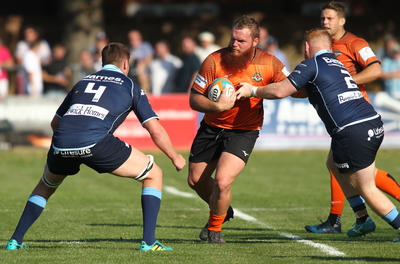 Ealing Trailfinders started the 2019/20 season in emphatic fashion with a comprehensive 57-26 victory over Bedford Blues at Goldington Road.

Ben Ward’s side were devastating in attack throughout as they crossed for nine tries to begin their defence of the Championship Cup with a bonus point win.

With conditions still showing signs of pre-season in 26 degree heat the players could have been forgiven for a slow start, but the West Londoners came flying out of the blocks and took the lead after just eight minutes.

Pat Howard broke the line and carried all the way up to the try-line from 50 metres out, and the ball was quickly recycled to James Cordy Redden who scored from the following phase.

Just five minutes later the second try was scored in impressive style. Jack Tovey spun the ball out to Reon Joseph who had three defenders in front of him but used his searing pace to run straight down the line to score in the corner. Craig Willis’ touchline conversion put the Trailfinders 12 points ahead.

A number of defensive sets then followed as Bedford looked to get back in to the match, but the visitors held out admirably and then in the second quarter pulled away whilst securing the try bonus point before half time.

With 30 minutes on the clock a penalty was kicked to the corner, and after going through the phases in the build up towards the line, Kieran Murphy picked a great line to fly past the final defender and dive over the line.

Bedford responded with a try from Pat Tapley after a break from former Trailfinder Grayson Hart to get them on the scoreboard, but the Green and Whites hit straight back as the bonus point try came courtesy of Jack Tovey.

Tommy Bell read a pass brilliantly to intercept and had Kieran Murphy alongisde him who carried the ball in to the 22. Tovey’s support line was rewarded as he received an offload and coasted his way to the line. That was to be the last play of the first half, with the Trailfinders heading down the tunnel with a 24-5 lead.

The second half started in the same way that the first half ended, as the Trailfinders continued to grow their advantage. With just two minutes gone Tommy Bell broke the line from first phase and had Rayn Smid alongside him who was able to stroll under the posts.

Harry Casson then crossed for try number six as he took advantage of a strong rolling maul to bundle over the line with the lead now over 30 points. A number of replacements then got their chance to impress, and the Trailfinders showed no signs of slowing down with more tries to follow.

Jordan Burns scored a typically characteristic try against his former side on the hour mark to continue the momentum. Ben West flew through the defence with a great support line, and Burns was on hand to race his way to the line.

Rayn Smid took his tally of tries to two with 10 minutes remaining, the captain was again the beneficiary of a break, this time from David Johnston before gathering the final pass to score. The conversion from Steven Shingler brought up the half century of points, which prompted a Bedford revival.

A spell of three tries in the final five minutes ensured that the Blues would secure a try bonus point, with the first coming from Dan Temm who showed his pace to run clear from the half way line.

Joe Atkinson then burst on to an offload to beat the defence for try number three, and they got their fourth from Ryan Butler who ran clear to dot down in the corner.

Appropriately it was the Trailfinders who ended the match by crossing for try number nine with the final play. They entered the 22 and kept hammering away at the line, with Jack Tovey stepping the last defender to cap off his debut with a second try. Shingler’s conversion was the last act, confirming the 57-26 win to start the season in perfect style.