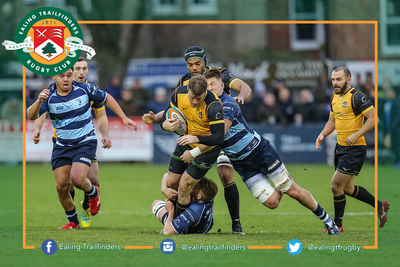 Ealing Trailfinders started 2019 with a frustrating defeat as they fell to Bedford Blues at Goldington Road.

Ben Ward’s men enjoyed most of the possession and territory but lacked a clinical edge, eventually seeing them suffer a 23-18 loss.

The Blues started strongly and took a 10 point lead after just seven minutes to race in to an early advantage.

Will Hooley kicked a penalty from in front of the posts to edge them in front before a loose clearance allowed them to counter attack, with a smart offload seeing Chris Czekaj dive over the line in the corner. Hooley’s touchline conversion gave them the perfect start in front of their own supporters.

The Trailfinders responded in the best possible way with Jordan Burns scoring just a minute later to cut the deficit. Dave Johnston gathered a high ball and stepped his way past three defenders and then drew in the final man to release the former Bedford scrum half who raced clear from just outside the 22. Craig Willis added the extras to bring the visitors right back in to the match.

Ben Ward’s side then dominated possession as they looked to go in to the lead despite playing up the slope in the first half, relying on their rolling maul to put them on the front foot. An offload from Harry Sloan sent his centre partner Pat Howard through the middle but he was eventually hauled down 10 metres from the line and Bedford stole the ball back.

The pressure eventually paid off, with Willis kicking a penalty from right in front of the posts to bring his side level on the scoreboard.

Just when it looked as if the Trailfinders would start to turn the pressure in to points they were undone by some ill-discipline in the final stages of the first half, allowing Bedford to take the lead just before the break.

Two offside penalties in as many minutes were kicked by American international Hooley, who ensured the Blues would end the half with a 16-10 advantage.

The West Londoners made a good start to the second half and had a great chance to take the lead in the first minute after turning over the re-start. The ball was immediately spun wide to Laurence May who dived for the line but a last ditch tackle held him up. The referee went back for an earlier infringement, but the ball spat out of the side and the Blues cleared.

From the next phase however the Green and Whites got a penalty in front of the posts, and Willis kicked straight through the posts to cut the gap to three points with half an hour remaining.

Another opportunity followed as a five metre lineout mauled towards the line for the visitors, but just as it began to get the momentum a knock on gave the Trailfinders more frustration.

Eventually the Trailfinders took a deserved lead on the hour mark as Matt Cornish rumbled over the line from close range. A penalty was kicked to the corner and the rolling maul drove over the line, allowing the hooker to dot the ball down. The conversion went just wide but the visitors now held a two point lead.

In frustrating fashion Bedford re-took the lead straight away as a loose ball bounced up to Lane who beat two defenders before offloading to Dean Adamson who was able to dive over the line under the posts. Hooley added the conversion to restore their five point lead.

Seb Stegmann and Rayn Smid then combined down the wing as they looked for a crucial try to bring the score level but the opportunity never arrived and Bedford saw out the closing stages to record a hard fought victory.