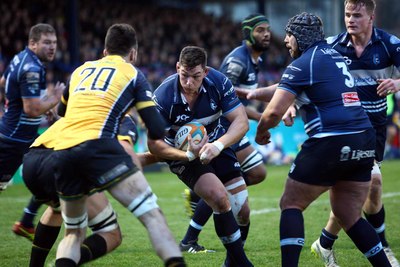 In what was the final match of the 2017 the West Londoners saved one of their best performances until last, as they came from 18-0 down with just 20 minutes remaining to earn a sensational win.

A penalty try as well as scores from Luke Carter and Barney Maddison brought the Trailfinders back in to it, before a nerveless conversion from Luke Daniels completed the drama in front of 3401 in Bedford.

The first half was one to forget for Ben Ward’s side who were uncharacteristically slow out of the blocks, and it was the Blues who raced in to the lead with two first half tries.

Harry Sheppard kicked the hosts ahead with a penalty after seven minutes, and they dominated possession in the early stages as they moved in to the ascendancy.

They were rewarded with a try on the 20 minute mark, as a huge overlap at the top of their famous slope allowed captain Michael LeBourgeois a free run over the try-line for the first five pointer of the match. Shepherd’s conversion was successful, extending their lead to 10-0.

The Trailfinders continued to look flustered and struggled in the set-piece as a number of lineouts went astray, and they were then punished with Bedford going over for another try.

A turnover in the midfield was quickly pounced on and spun to Dean Adamson who dived over the line after some neat hands to find the winger in space. The conversion went wide, but a penalty five minutes later ensured that the hosts held an 18-0 lead at half time.

It was immediately clear that the Trailfinders looked a different side in the second half and they began with plenty of intent as they went through the phases.

Despite spending plenty of time in the Bedford 22 they couldn’t translate that on to the scoreboard until the hour mark when a penalty try brought them back in to the match. A five metre scrum powered towards the line, and referee Simon Harding went straight under the posts to cut the deficit to 18-7.

Bedford’s re-start went straight in to touch which signalled how the Trailfinders were forcing their way back in to the match, and just moments later Luke Daniels kicked a penalty from in front of the posts to trim the gap to just eight points.

Again from the re-start Ben Ward’s men responded straight away as their performance went up the gears, with Luke Carter going over for a try to bring them within one point.

A superb kick chase forced Bedford in to an error, and Mark Bright bundled towards their defence before Carter gathered from outside the 22 and raced away to the line. Daniels’ conversion ensured we headed in to a blockbuster finish with the score at 18-17.

However it was the Blues who were to score next as it looked like they had secured the win with eight minutes left. They battered away at the try-line after some dominance up front before Alex Rae gathered a flat pass and couldn’t be stopped from just five metres out. They extended their lead to 23-17, but crucially the conversion went wide which kept Ealing within a converted try of going in front.

That much-needed try came with just three minutes remaining to send the travelling supporters in to raptures. A penalty was kicked to the corner, and with the resulting maul hauled down Barney Maddison powered his way over from close range. The conversion was still needed, and Daniels kept his cool to impressively edge his side one point in front.

That wasn’t to be the end of the drama, as the Blues came flying back in search of the win. They went through the phases and knew that a penalty would give them the chance of victory, but the defence kept their discipline and forced Bedford in to a drop goal. Hooley’s attempt went wide and confirmed the victory for Ealing, in circumstances that looked very unlikely just 20 minutes earlier.

The result means that the Trailfinders consolidate their position in second, entering 2018 fifteen points ahead of Yorkshire Carnegie in third.