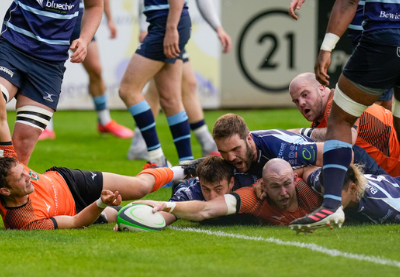 Man of the Match
Max Bodilly

It proved to be a tough Friday night under the lights for Ealing Trailfinders, as they battled against a resilient Bedford Blues side. With a gritty performance at Goldington Road, to come away with the bonus point win.

A fast start to proceedings saw Centre's Max Bodilly and Pat Howard light the touch paper, in a game which saw the Trailfinders score another six tries to add to their Greene Kind IPA Championship points total.

Ben Ward’s men hit the road looking to keep their playoff final hopes well and truly in their own hands, with rivals Doncaster Knights and Saracens breathing down their necks, in a race for the top 2 playoff places.

After an impressive 69-7 victory last time out over Richmond, the West London outfit named six changes to face Bedford including a debut in the back-row for newcomer Max Northcote-Green.

It took just five minutes for The Trailfinders to find space, with break down the left gaining valuable metres, going through the phases through the forward pack, until Max Bodilly found himself in the perfect position to pick and go, stretching to dot down. Shingler adding the extras to put the visitors seven points up.

Just moments later Bedford were once again penalised for not releasing at the breakdown, with Shingler kicking precisely to the corner. A smooth line out play between Shaun Malton and James Cannon led to a rolling maul, before the ball was moved out to the backs, with Bodilly feeding it out wide to Pat Howard who raced home to score the Trailfinders second of the evening, Shingler once again adding the extras to double the travelling sides points tally.

Bedford's first spell in the visitor's 22 didn't come until the 15th minute, when Will Maisey kicked to corner after Ealing Trailfinders were penalised at breakdown, but the ball was quickly won back by the visitors, when Lewis Thiede showed strength at the break down to win the penalty.

The Trailfinders were soon on the warpath again with just 20 minutes on the clock, after a big kick into touch within Bedford's 22 from Shingler led once again to a well worked line-out. The ball being worked out to the back from Malton's Lineout which found James Cannon, before Charlie Walker was found in space to power home for The Trailfinders third try.

It seemed to be all one way traffic, but Bedford weren't going to go down without a fight, working the ball out wide after breakdown inside Ealing Trailfinders 22, with Pat Tapley dotting down in the right hand corner, to get the home sides first points of the game.

The home side weren't finished their either, when with the clock in the red, Bedford scored again through Tapley, Matt Worley breaks away from the chase Trailfinders defence, offloading for the winger to score. Fly-half Will Maisey this time adding the conversion to close the gap going into half-time.

The home side came out, picking up where they finished the first half, after a number of strong carries in the sloping corner of the field put them within touching distance of the white wash. Joe Atkinson then latched onto the back of the rolling maul, to dot down for the home sides third try of the game.

Moments later a kick over the top from Shingler put Bedford's defence under pressure once again, winning the turn over at breakdown the Trailfinders built multiple phases inside Bedford's 22, after a number of scrums the ball was worked right to Pat Howard who stepped inside to dot down for his second of the game. Shingler once again adding the extras.

The game was all but put to bed with ten minutes to go with a big scrum from the Trailfinders replacement front row, saw Ealing keep hold of possession, going again and again with a number of big carries, before Jordan Burns was fed the ball by Max Bodilly, throwing the dummy and racing through the gap to score.

The visitors weren't finished there though, and a sixth try was awarded with just minutes to go. A great break from Angus Kernohan, who picked up a loose knock on ball to race away, with only a last minute swipe from Bedfords chasing back defence stopping him from scoring. This momentum though led to Guy Thompson dotting down at the back of the rolling maul, after coming off the bench to replace Simon Uzokwe.

Another bonus point win for Ben Ward's side and another step closer to securing a place in the Championship playoffs, with next weekend's clash with Doncaster proving a season defining fixture for both sides.