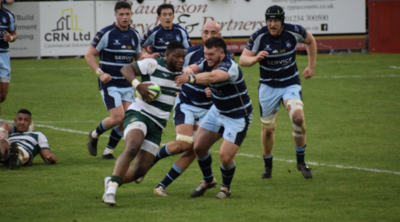 The West Londoners headed to Bedford on Saturday afternoon to take on a Blues side who had also picked up four bonus-point wins so far this season.

In what has started as an entertaining kick-off to the Championship season, only four points separated the two sides going into the game, with neutrals licking their lips as what promised to be an exciting encounter between two exciting teams.

It was Ben Ward's men who came firing out of the blocks, with tough defending by the away side leading to Simon Uzokwe winning his team a penalty just inside their own half. Shingler kicked to the 22, and several phases later the ball was worked out to Matt Gordon, who broke free from his tackler to race away opening the scoring with just three minutes on the clock.

Just moments later Trailfinders were in again, this time it was fellow back David Johnston who was fed the ball on the wing, darting inside to beat his man and dot down for his side's second try of the game with just over 5 minutes gone. Shingler slotted home the conversion to put the travelling side 14 points to the good.

Not the start that the Blues were looking for, Mike Rayer's men soon started to apply their own pressure with a sustained period inside Trailfinders half. However it was to prove in vain as another solid defensive display saw back-rower Simon Uzokwe win another penalty at the breakdown, alleviating the pressure that his team were under, much to the dismay of a roaring home crowd of just over 2000 spectators.

Moments later it was time for Uzokwe to punish the Blues once again, this time at the other end of the pitch. Luke Daniels found space on the wing and broke free to gain valuable metres, moments and several phases later the ball was fed back to Uzokwe, to power his way over the line for Ealing Trailfinders third of the afternoon.

Bedford looked shell-shocked by the efficiency of Ben Ward's men and struggled to get a foothold in the game, nothing they were doing seemed to pay off and were met by a stern Trailfinders defence that stopped them from gaining metres. The Blues defence were holding strong after further pressure from the visiting side, but were once again pierced after Jack Digby broke free from his tackler to get Ealing within 10 metres. The ball once again fed back to Uzokwe, who used his brawn to dot down for his second try.

Ealing Trailfinders were dominant in the first half and weren't content with just wrapping up the bonus point before half-time, with Matt Gordon being found in space on the outside to race away to score another try.

With the clock in the red, there was still time for Ward's side to inflict more pain, when another won penalty led to Shingler kicking to the corner, Malton throwing an arrow line out and jumping onto the back of the rolling maul, who was bundled over the line with the Hooker getting the ball down, leaving Trailfinders 38 points up going into the break.

The home side reappeared for the second half and looked revitalised, perhaps knowing that they had an uphill battle to get anything from the game, they sprung into action much to the delight of the Bedford fans.

After what was an impressive start to the second half for the home side, they were finally rewarded for their efforts after 50 minutes, when Dean Adamson was found in space on the left wing dotting down, after sustained pressure inside Ealing's 22.

Moments later Bedford looked to have dotted down again after a clever grubber kick caught Ealing's backline off guard. Dotting down their try was ruled out for a knock-on when grounding.

It was a frustrating start to the second period for the West Londoners with attacks just not coming off, however ten minutes later Ealing were on the scoresheet once again, this time is was Club Captain Rayn Smid who was found space out wide, brushing off the on coming tackle to score in the corner extending the away sides points tally once again.

The men in green and white looked to kill the tie off and when Charlie Walker was fed the ball out wide once again stepping his man to race home, Shinglers conversion bringing up the half century.

With the eighty minutes up Bedford were looking to finish the game strongly, giving their supporters something to cheer about and they got their second try of the game when Jack Garside was put in to score.

A commanding performance from the league leaders, as we go into a break week before welcoming Jersey Reds to Trailfinders Sports Club for Round 8 of the Championship Rugby season.