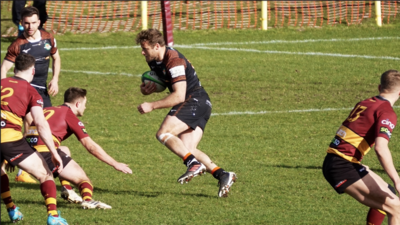 Ealing Trailfinders travelled up the M1 on Saturday afternoon to face Ampthill in Round 20 of the Championship Rugby season.

Looking to keep pressure on Doncaster Knights, who lead the league, the West Londoners made the trip looking to make it six wins on the bounce away from home.

It was the perfect start for Ben Ward’s men, as with just 4 minutes on the clock, early pressure saw Trailfinders within the Ampthill danger zone. Multiple phases later from the pack and the ball was worked out wide, finding Angus Kernohan, who would skip over the try line for the first score of the tie. Craig Willis adding the extras with the boot.

The title-chasers were in hot pursuit of continuing their fine away form, and midway through the half, their lead was doubled. With the Trailfinders pack looking to maul their way towards the try line, Ampthill’s Jac Arthur came in and took down the maul illegally. The referee has only one decision in mind, as he awarded a penalty try and sent Arthur to the sin bin.

Fourteen points to the good, things had started just the way Trailfinders would have wanted, but Ampthill were fighting hard to stay in every battle. In an end to end second period in the first half, both sides were guilty of making mistakes which caused them to lose great attacking opportunities.

Ampthill keeping up the pressure, would finally hit back before the break, making the most of a penalty; their lineout worked efficiently, seeing hooker Theo Dan dot down.

Coming out after the break, another fast start saw Trailfinders adding points to the scoreboard once again. Another fine piece of work by the forwards got the travelling side within Ampthill’s 5 metre. This time it was Simon Uzokwe who would apply the finishing touch to extend his side's lead.

Midway through the second half, the bonus point was secured when more powerful phases saw Craig Willis go close, when he looked to make a break through the Ampthill defence. The ball was then quickly recycled by Craig Hampson, who would feed the ball to Rayn Smid, firing his way over the try line.

The icing was well and truly put on the cake when with a quarter of an hour left on the clock, Kernohan was in for his second of the game. Quick hands seeing him put in on the right wing once again, diving down to score in the corner. Willis making it four from four from the tee.

All that was left with moments in the game was for replacement Steven Shingler to slot home a penalty after Ampthill were penalised just outside of their 5 metre.

Another impressive win on the road for the Trailfinders, as they look forward to a mouth-watering clash against Cornish Pirates in two weeks time.