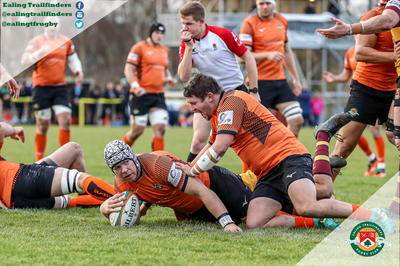 The West Londoners trailed 22-14 with just eight minutes remaining, but a try from Jordan Burns and a 79th minute penalty from Craig Willis ensured that they made it five wins from five in the Championship Cup and set up a group decider against Coventry next weekend.

The Trailfinders raced in front with just two minutes on the clock as Kieran Murphy opened the scoring. A penalty was kicked to the corner and after going through the phases the ball ended up with the number eight who powered his way over the line. Craig Willis added the conversion to put his side 7-0 in front.

Ben Ward’s side then made a number of opportunities to extend their advantage but they couldn’t convert them and were punished shortly afterwards. A rolling maul was heading to the line and as Elliot Millar Mills broke away it looked like a try was coming but he was brought down just short and penalised.

Ampthill got their first try of the afternoon just before the 20 minute mark to get right back in to the match. From a lineout the ball was spun wide and found Josh Gillespie on the wing who has the pace to score in the corner. The conversion went wide but the Trailfinders were now just two points in front.

The hosts then went ahead as Sam Costelow’s penalty dissected the posts, but that sparked the Trailfinders in to life who responded immediately.

A lineout 20 metres from the line set the platform, and then the maul rampaged all the way to the line as Alun Walker dotted down under the post. Willis added the conversion, giving his side a 14-8 lead at half time.

After the break the Trailfinders were looking to kill the game with an early score and had chances courtesy of Elijah Niko and Alun Walker but their achilles heel for the afternoon was their discipline and that cost them again.

Ampthill then went ahead to give the home supporters a huge lift with half an hour remaining. Costelow broke the line and drew in the final defender before passing inside to Syd Blackmore who had a clear run. The conversion gave them a one point advantage, and it would get better for the hosts in the third quarter.

Peter Lydon was sent to the sin-bin and that opened up another opportunity for Ampthill. A penalty was kicked deep in to the 22, and from the resulting lineout Aleki Lutui powered over the line. The conversion gave them a 22-14 lead with just over 10 minutes left.

Jordan Burns would then take matters in to his own hands and gave the Trailfinders a lifeline in the closing stages. In trademark style he dummied from the base of a ruck and ran straight under the posts, before Willis added the extras to cut the deficit to just one point.

Burns then made another break and passed inside to Matt Cornish who looked like he would make it over but was hauled down just short as Ampthill continued to hold out the visitors.

With just over one minute left the decisive moment then gave the Trailfinders a huge sigh of relief. A penalty inside the 22 saw Craig Willis smash the ball through the posts, and then straight from the restart he hammered the ball in to touch to confirm a dramatic two point victory.

That win now means that the Trailfinders host Coventry next Saturday knowing that a win will secure them a home Quarter Final, tickets can be purchased here.