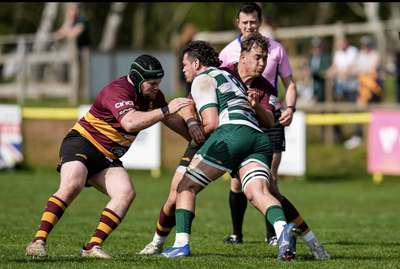 Ealing Trailfinders secured a vital win away from home this afternoon in the first leg of the Championship Rugby Cup Quarter-Finals at Ampthill.

It had been exactly a month since Trailfinders had taken to the field following their Championship title-winning victory over Richmond in West London, and despite a number of changes, once again they ran out winners at Dillingham Park.

The game didn’t start the way Ben Ward’s side would have wanted, though, as Ampthill made the most of some early pressure and well-worked play to score the first points of the tie. A 50 22 saw them pile the heat on the Trailfinders defence, and before they knew it, a strong set-piece saw Jamie Jack burrow his way over the try line.

It was a wake-up call that Trailfinders needed, and they sprung back into action as the backs worked the ball out wide to find David Johnston, who skipped around the last defender to score the first for the travelling side.

Just five minutes later, Trailfinders were at it again, this time Cam Terry making his starting debut, crashed over at the back of a rolling maul, Steven Shingler adding the extras.

It was the start of a purple patch for the West Londoners, and before they knew it, they were in again. Some great defence play from Jack Digby, incepting an Ampthill kick, saw him break free, making up a lot of ground. The ball was recycled before Charlie Walker was found out wide to score the third of the afternoon.

The second half kicked off as the first started, with big battles across the field, leaving no score for the opening 10 minutes. Ampthill were however penalised shortly after as Harvey Beaton was sent to the sin bin for collapsing the scrum inside their 22. Moments later, the ball was worked out wide to James Cordy-Redden, who showing a clean pair of heels, beat the Ampthill defender to dot down in the corner.

Shortly after, Ampthill would hit back, this time Theo Vukasinovic, the man to score the home side's points.

Narrowing the gap, the men of Dillingham Park smelt blood, and several minutes of dominant possession later, they would be over again, this time being awarded a penalty try, moments after Trailfinders James Gibbons was sent to the sin bin after a number of penalties were given away.

With the cup tie poised and just three points between the two sides, the game was on a knife-edge, however, with five minutes to go, Reuben Bird-Tulloch was on hand to show some nifty feet, darting back inside and beating his man to score, Shingler adding the extras to secure a 10-point lead going into the second leg at Trailfinders Sports Club next Saturday.