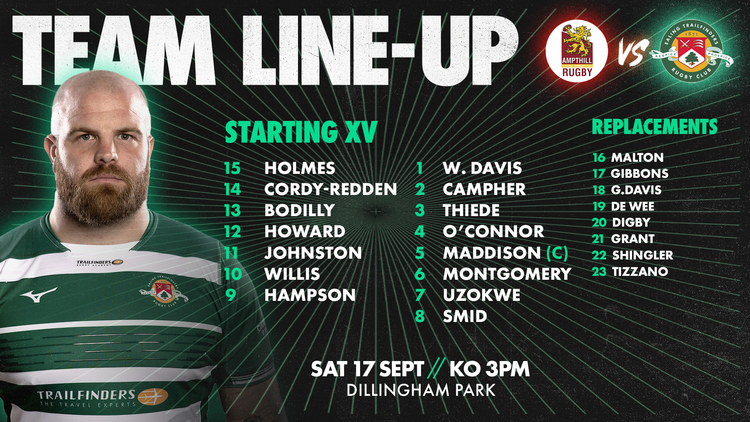 Ealing Trailfinders have named a strong squad for Saturday's away fixture against Ampthill.

Director of Rugby Ben Ward and his coaching team have made five changes to the side that secured a bonus point 29-10 victory at home against Doncaster Knights last Saturday.

After a dominant scrum display last weekend, Jan-Henning Campher and Lewis Thiede continue in the front-row, while Will Davis comes in for Kyle Whyte.

In the engine-room, Barney Maddison retains the captain’s armband and partners David O’Connor, with Bobby De Wee moving to the bench.

Fresh from his try-scoring return to the side, Rayn Smid keeps the eight shirt as does Simon Uzokwe on the open-side. Will Montgomery comes in on blind-side to make his starting debut.

In the back-line, the two Craigs, Hampson and Willis, continue at scrum-half and fly-half respectively after their impressive displays last week. Pat Howard comes into the midfield for Reuben Bird-Tulloch and partners Max Bodilly in the centres.

The final change comes in the back three. David Johnston has recovered from his niggle and starts on the left-wing. He partners Jonah Holmes, who was named player of the match after his powerful debut against Doncaster, and James Cordy Redden who put in a strong display last Saturday.