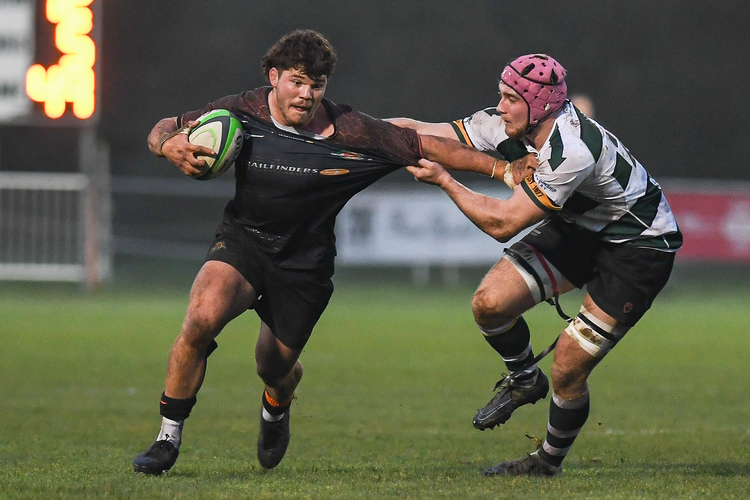 Four powerful rolling maul tries helped us make it nine wins out of nine this season, after a tough fought 19-26 win in the Championship Cup at Nottingham.

Despite eventually getting the result, Nottingham raced out to a 12-0 lead after two early tries. But then three unanswered scores saw us move into the lead.

The hosts did level it up just after the hour mark, but we were able to score our fourth and bonus point try ten minutes from time to ensure we left The Bay with the full five points.

After a respectful and well observed minutes silence, in which each captain laid a poppy wreath as part of Remembrance Sunday, the game got underway.

It was somewhat of a disappointing first 40, as the hosts came out of the blocks the faster of the two sides. Early pressure saw our defence put into effect from the outset, but we stood firm after soaking up multiple phases.

Although we had a poor start, we should have actually scored the first try of the game. A great line break saw us execute a 2-on-1 which put Jack Metcalf in sight of scoring. The fullback closed in on the try line, but as he dived the Nottingham defender managed to knock the ball free and the scoreboard remained unchanged.

We were very quickly made to rue this missed opportunity, as Nottingham scored the first try of the game just before the quarter of the hour. After strong play in the centre, Morgan Bunting put in an effective cross-field kick to find David Williams in the corner.

Five minutes later, they had their second, as Bunting himself was able to take advantage of the overlap and get over in the same corner that Williams had just scored in.

Despite these two scores, we were able to stay composed and went back to one area of the game that has been a real strength of ours all season, the rolling maul. With a line out just outside the Nottingham 22, the maul was able to march forward 15m, before Simon Uzokwe broke off and powerfully bundled over.

The rest of the half saw both sides doing as many bad things as they did good, and although each had opportunities to score again, neither of them were able to take them. Half-time score: Nottingham 12-5 Ealing Trailfinders.

Although the second half also saw us again start slower than we’d have liked, quickly we were on the front foot again. A strong kick chase saw us regain possession just outside the Nottingham 22. Slowly we were able to move forward, fighting for every inch but getting them nonetheless. Just as we came within striking distance of the try line, our final surge forward saw a Nottingham player get underneath the ball and we were agonisingly held up.

This reprieve for Nottingham only lasted five minutes, as just after the 50 minute mark, Carlo Tizzano crossed for his first try of the game after the rolling maul had come up short just a few phases earlier.

As the hour mark approached Tizzano completed his brace, this time on the back of a 12-man rolling maul, as we edged into the lead for the first time in the game.

This lead didn’t last for long however, as Nottingham scored back just two minutes later. The hosts won a penalty just inside our half and they took it quickly. Spotting space in behind they kicked through but it unfortunately deflected off our defender and straight into the hands of Jordan Olowofela who ran in unopposed.

With ten minutes to go it looked like the game might have been heading for a draw, but another huge rolling maul saw us grab the bonus point and decisive score as Jan-Henning Campher dotted down.

Despite being put under some pressure in the closing stages, we were able to close out the match.

Director of Rugby Ben Ward said: “Sometimes you just have to find a way to win and today was one of those occasions. Credit has to go to Nottingham for putting us under so much pressure, but I’m pleased to be coming away with all five points.