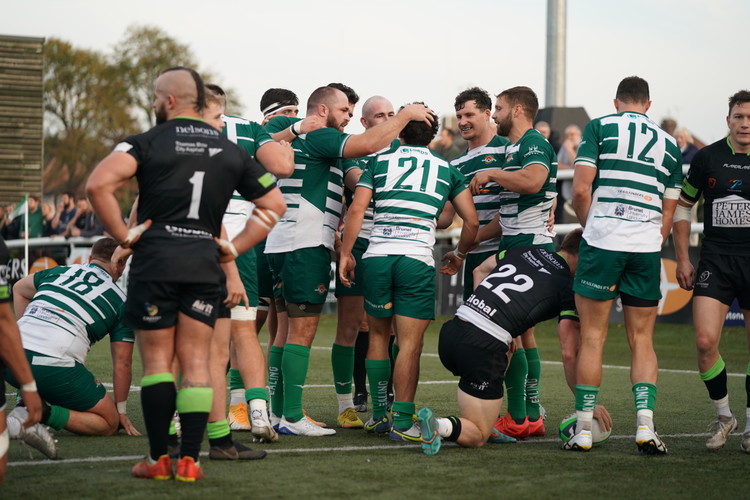 After a blistering start, Ealing Trailfinders scored 10 tries to run out 64-33 winners against Nottingham.

It took only four minutes for Ealing to break the deadlock, as a beautifully weighted Craig Willis grubber kick bounced into the hands of Jonah Holmes to allow him to score in the corner.

Five minutes later we were in again, this time it was through a screamer from Jordan Burns. Nottingham knocked the ball on inside our 22 and it was quickly transferred to Burns who sprinted clear, before skinning the final man to score underneath the sticks.

A minute later we scored again. With good turnover ball we managed to shift the ball wide and made good meters. Although we were pulled down just short, we remained patient before exploiting the overlap and putting Holmes in for his second.

It took only 17 minutes for Trailfinders to add the bonus point and for the Welsh International to complete his hat-trick, as Holmes intercepted a Nottingham pass and scored in the corner.

After the blistering start, it was understandable that the rate of scoring was going to drop off slightly, but just as Nottingham looked like they were building into the game, Reuben Bird-Tulloch pounced on a loose ball and ran it in from 50 metres out.

On the stroke of half-time, the visitors were camped on our line. Although Steven Shingler was sent to the bin after repeated team penalties, the defence stood firm and the half-time score was Ealing Trailfinders 33-0 Nottingham.

As the teams came back out for the second half, Ealing hit the ground running as Burns went in for his second after a great break and offload from Carlo Tizzano.

After this start we would have hoped to have kicked on, but the next five minutes were something to forget from a Trailfinders perspective. Firstly Nottingham scored straight from the restart, before they added their second and third tries two and four minutes later after capitalising on some loose Ealing passes.

After this brief lapse in concentration, Ealing regrouped and managed to re-establish our dominance. Despite being a forward down after Kyle Whyte was sent to the bin, we won back-to-back scrum penalties which allowed us to set up a rolling maul from five metres out and Simon Uzokwe was able to dot down.

With 12 minutes to go and the score at 47-21, many may have expected the scoring to end there but there were still six tries to be added.

The first of these saw Uzokwe grab his second following on from an outstanding break from debutant Jack Grant. Nottingham responded five minutes later through a rolling maul try of their own to see them take a deserved try bonus point.

With five minutes to go Bobby De Wee and Lewis Chessum were sent to the bin following a scuffle on the pitch.

After his great break, it was now the turn of Jack Grant to score a three minute brace. Firstly he got on the end of a beautiful free flowing move to dot down from close range, before moments later he identified space on the blindside of the scrum and executed a great 1-2 to score in the corner.

In the final play of the game, Nottingham's Harry Graham went over from close range to make the full-time score: Ealing Trailfinders 64-33 Nottingham