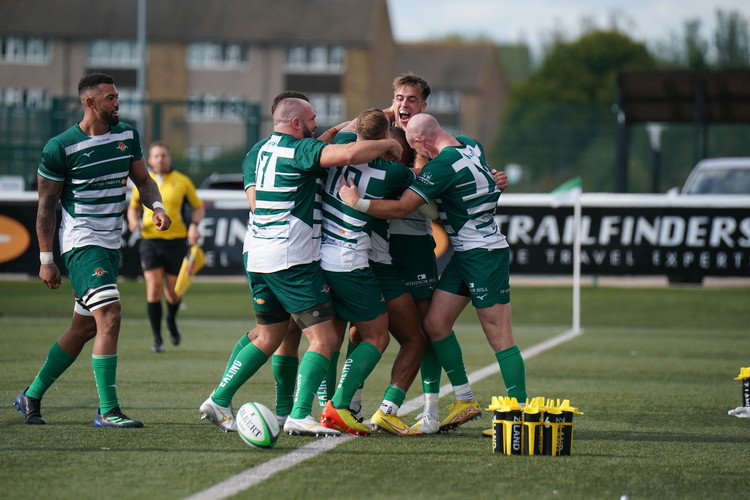 Ealing Trailfinders got their title defence off to the perfect start with a 29-10 bonus win over last year’s runners-up Doncaster Knights.

Today’s game was understandably overshadowed by much bigger events, but both sides and sets of supporters were able to come together for a minute’s silence to mourn the loss of HM Queen Elizabeth II at the start of the match.

When the game kicked-off, it got going almost immediately with Jack Metcalf and James Cordy Redden making good early breaks down each wing. Doncaster must be credited however for their impressive scramble defence to keep the scoreboard at bay in the early stages.

As the quarter of the hour mark approached, both sides begun to ease into the game, with Trailfinders looking the stronger but failing to get any points to show for it.

This changed five minutes later. After a strong passage of build-up play, Ealing set up camp inside the Doncaster 22. With a three-on-three out wide, Craig Willis called for the ball and looked to put in one of his men out wide. The Knights closed off all his available passing options, so Willis put his head down and was bundled over by his teammates. The conversion out wide was missed and so it was a five-point game.

The rest of the half saw the ball spent mainly in the air, with both sides adopting the up-and-under to gain territory. Then on the stroke of the interval, Ealing made a great break down the left. George Simpson cynically infringed at the breakdown. He was shown a yellow card and Craig Willis slotted the penalty in front of the sticks.

After the Ealing Trailfinders Foundation showcased their girls sports day on the pitch at half-time, the second-half got underway. It was a lightning start which almost saw the West-Londoners score within 30 seconds of the restart.

Although Trailfinders didn’t manage to make it over then, they did manage to score just eight minutes later. Jonah Holmes picked up a loose ball deep inside his half and managed to beat the first man. He then burst through another tackle and sidestepped the final man. It looked as if he was going to score a wonder try, but a cruel tap tackle just prevented him from doing so. Ealing stayed patient however, and Willis put in a delightful cross-field kick which Rayn Smid superbly plucked out of the air to score.

Less than 10 minutes after that, Ealing were in again. A strong rolling maul inside Doncaster’s 22 put the pack in a good position. We then spun it wide and Willis delightfully delayed the pass to put Metcalf in under the posts on his competitive debut.

With 20 minutes to go Doncaster looked to have the momentum, but Ealing did well to restrict them to only one penalty.

With the clock in the red, Ealing were in desperate search of a fourth score and the try bonus point. After failing to score initially, the team recycled and Carlo Tizzano popped up on his debut to dot down underneath the sticks and complete the victory.