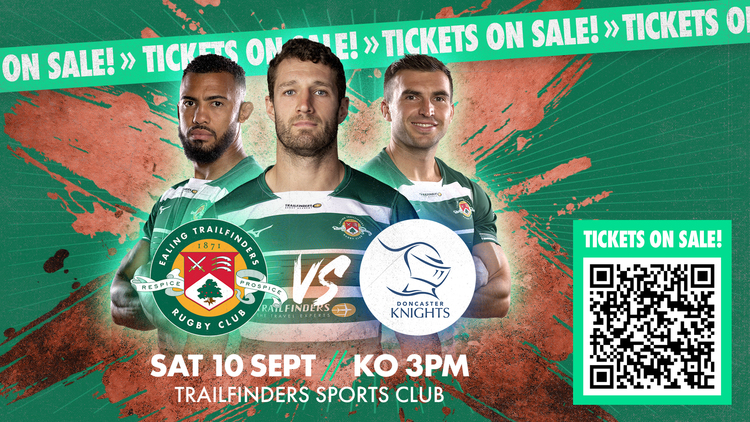 Tickets are on sale for Saturday's blockbuster league opener against Doncaster Knights.

Our Championship opener will be no easy ride, as we face last year’s runners-up Doncaster Knights at Trailfinders Sports Club. The game comes off the back of an impressive 42-12 preseason win over Zebra Parma last Saturday.

After their strong campaign last season, Doncaster have had a reasonable amount of turnover within their squad over the off-season. The headlines include, Sam Graham and Josh Peters both making the step up to the Premiership, signing for Northampton Saints and Newcastle Falcons respectively. Guido Volpi has also moved to last week’s opponents Zebre Parma, while lock Danny Drake has moved to North Harbour in New Zealand.

Despite these losses, the Knights have also recruited well, signing some standout Championship players from last season, as well as some with Premiership experience. The Hartpury duo of George Simpson and Robbie Smith, London Scottish pair Ehize Ehizode and Maurice Nwakor and Richmond’s Jared Cardew. These signings are boosted by tight-head props Karl Garside from Northampton Saints and Mac Wilson from Harlequins.

Doncaster have had a mixed pre-season campaign. They struggled in their first game, losing 0-56 to an impressive Wasps display. They then dusted themselves down and faced a strong Newcastle Falcons side at home last Friday night. Despite the calibre of the opposition, the hosts played well for large parts of the game and were ahead for most of it, but Newcastle ultimately snatched it near the end, winning 29-33.

Off the back of this impressive performance, the Knights will travel down to West London with some confidence. They put in good performances on both occasions last year when we faced them, so the encounter on Saturday promises to be a cracker.

Thank you to Saturday's Match Sponsor, Windsor Hill Mortgages. As part of Windsor Hill's sponsorship they are offering £100 cashback to any supporters who attend an Ealing Trailfinders home fixture in season 2022/23. Simply show proof of your valid match ticket to gain the £100 cashback (this will be provided upon completion of your mortgage). To take advantage of this offer and to discuss your mortgage requirements contact Windsor Hill by clicking here or visiting: www.windsorhillmortgages.co.uk.

Player of the Match Sponsor:

Our Ealing Trailfinders Foundation team are hosting a girls sports afternoon on Saturday. We have girls rugby, with guest coaches Kim Oliver (former England player and Henley College Head Coach) and Lou Meadows (Women's Performance Manager), alongside girls football and girls netball. Activity takes place from 1:30pm-2:30pm in the lead up to kick-off (on the top pitch) and during the half-time break. The participants will also form the guard of honour.