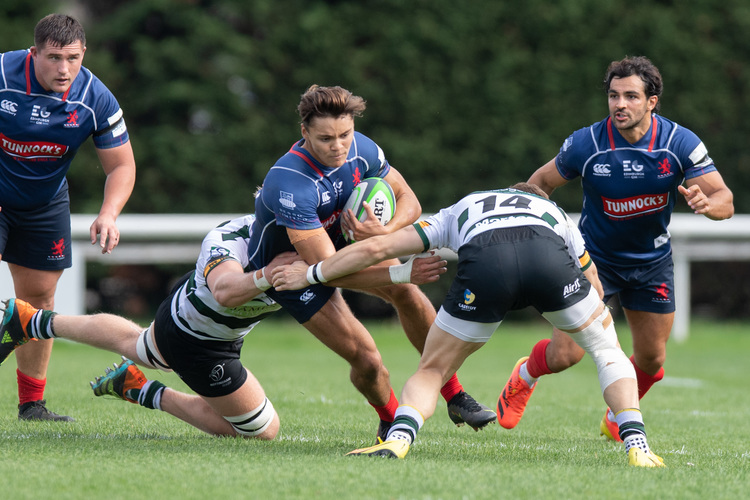 As the new Championship season got underway, it wasn't just against Doncaster that some Trailfinders were in action.

In a new segment for this season, each week we'll round-up all the impacts made by our loan or dual-registered players over the weekend.

This week there were Trailfinders in action for Bedford Blues and London Scottish.

On the opening night of the new Championship season, centre James Little and back-row Ollie Newman both ran out for Bedford Blues in their defeat at Coventry.

Their involvement was relatively last minute, as it had appeared that Bedford may have struggled to field a team due to their strategic partners, Northampton Saints, having two fixtures within 24-hours of the Blues’ league opener. Pre-game, Bedford Director of Rugby Mike Rayer said: “We’re indebted to Ben Ward and Pat Lam (Bristol Bears DoR) for their assistance this week going into our first game. Preparation has been pretty good all things considered.”

Despite a quick start, Bedford’s ill-discipline ultimately cost them as they conceded 22 penalties which helped Coventry to their eight point victory.

James was the more effective of the pair, making the second most carries by constantly charging through the midfield and was one of only two players to make an offload for Bedford as they were prevented from playing their traditional free flowing, attacking rugby.

Ollie, returning to the club he spent the past two seasons on dual-registration with from Northampton Saints, was as tenacious as ever, disrupting the breakdown throughout the contest.

Between the two of them they made 13 tackles, including two from James within two metres of the line when trying  to repel the Coventry attack, but ultimately the hosts were too powerful at the driving maul and built a platform to secure victory.

Prop Elliot Chilvers and utility-back Josh Gillespie have both been performing well for London Scottish throughout preseason. Elliot started in the Exiles' strong performance at home against Harlequins a fortnight ago, while Josh got on the scoresheet during their impressive 34-26 away win at URC side Edinburgh.

Coming into Saturday’s fixture at the Athletic Ground, Scottish were rightfully optimistic about getting a result, but fell to a clinical Nottingham performance.

Josh started the game and looked industrious for his 60 minutes, constantly looking for work. Elliot impressed off the bench, despite the fate of the game already being sealed when he came onto the pitch. He worked hard, winning several scrum penalties in the final quarter and also helping push over hooker Austin Wallis for Scottish’s final try of the game.