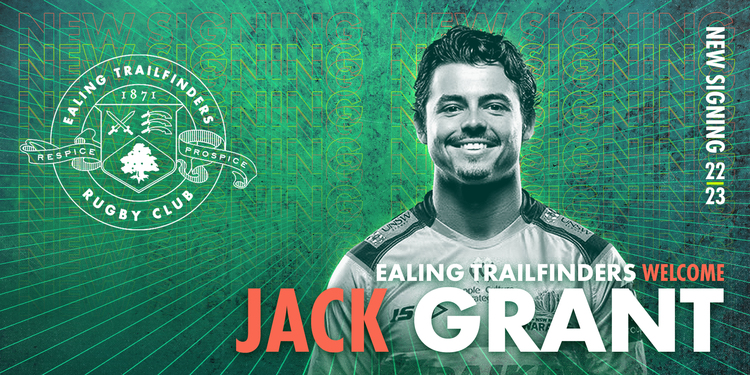 Ealing Trailfinders are pleased to announce the signing of scrum-half Jack Grant from Super Rugby side NSW Waratahs.

The 28-year-old arrives at Trailfinders Sports Club in some of the best form of his career. He featured in nine out of the Waratahs 16 Super Rugby fixtures in 2022, starting four games and making an impact off the bench in the other five.

On his first two starts of the season he helped the Waratahs defeat Western Force in round four and the Melbourne Rebels in round five, before finishing off a superb try in round six against the Queensland Reds.

Jack started his career at the Sydney Rays in the National Rugby Championship before shifting over to local league rivals NSW Country Eagles in 2018. He stayed with the Country Eagles for two seasons, playing in every game during the 2019 season, as they just missed out on the play-offs by a single point. In 2020, Jack left Australia to play for the NTT Red Hurricanes in the Japanese Top League, however his time in Osaka was cut short due to the COVID-19 pandemic.

Last year, he returned to New South Wales to play for the Waratahs and after finding his feet during the 2021 Super Rugby AU and Super Rugby Pacific campaigns, he has gone from strength to strength as he helped guide the Waratahs to the play-offs this season.

On discussing his decision to join Ealing Trailfinders, Jack said: “I’m pleased to be joining such an ambitious club with such a clear plan of where we want to get to and achieve this season. I’m looking forward to diving into all the new challenges and cultures and enjoying all these new experiences with a smile on my face.”

Director of Rugby Ben Ward added: “Jack is a player who we have been monitoring for sometime and he really impressed when he stepped up for the Waratahs during this season. His kicking game is very strong and he does the basics very well, while giving us the option of playing the game at a different tempo.

“Jack joins an already strong set of scrum-halves and having this competition for places will only drive standards in training and improve the group as a whole.”