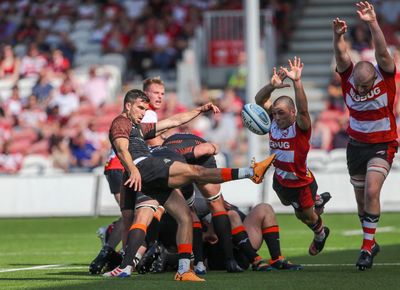 In the return fixture of both sides first pre-season outings, Ealing Trailfinders travelled to Kingsholm to face George Skivington’s Gloucester Rugby. A week after Trailfinders walked away with a 34-29 victory back at Trailfinders Sports Club, it was time for Kingholm to play host to Gloucester who ran out at home for the first time this season.

Both sides made a number of changes to their sides from their opening pre-season clash, with Ben Ward making 10 changes to his starting 15 and George Skivington making six.

The home side started the stronger in a hard faught battle which saw George Skivington’s men get on the front foot early on. It was an opening few minutes that were played inside Ealing Trailfinders half and Gloucester were already knocking on the door with just five minutes played. A penalty conceded by Trailfinders led to Twelvetrees kicking to the 22. From the line out a break from Jack Singleton got Gloucester five metres out, before Referee Craig Maxwell Keys brought it back for penalty advantage. Gloucester first scrum of the game was strong as the ball was worked out wide to Jonny May, but a chasing back Cian Kelleher defended well to put May into touch. A quick Trailfinders line out helping the away side clear their lines and make it back to halfway without conceding.

After several key battles up front it was Gloucester’s attacking play that put them on the scoresheet first when a Jack Singleton lineout to Andrew Davidson was fed down back to Singleton to break free and get the home side within 5 metres. The ball was then worked out wide to Kyle Moyle, who dotted down for the first try of the game. The early lead not extended as Lloyd Evans missed the conversion.

The early momentum continued from Gloucester as a lineout from starting debutant Jan-Henning Campher to Simon Linsell was dropped, leaving Gloucester to kick to touch well inside Ealing’s 22 and overt leaking any points.

Trailfinders first moment of sustained pressure came after 18 minutes as they won a penalty at the breakdown after a huge Pat Howard tackle. Bill Johnston kicked to the corner with Jan Henning-Campher and Simon Linsell once again linking up. A pick and go from Campher got Trailfinders inside the 5 metre, before a huge hit on Campher by former Trailfinder Jordy Reid forced a knock on from the South African.

The hard work by Trailfinders was paying off, with more possession inside Gloucester’s half, but nothing to show for it with 25 minutes on the clock.

Just moments later it was Gloucesters turn to dial up the pressure once again and when their forwards got the home side within 5 metres, all it took was some quick work from scrum half Ben Meehan to feed the ball to Tom Seabrook to dot down with Billy Twelvetrees adding the extras.

Twelvetrees once the man of the moment once again as he found himself in the perfect position to intercept a pass along the back line from Bill Johnston, charging through he ran out of steam inside the 22, but had England’s Jonny May on his outside who was fed the ball dotting down for the Cherry and Whites third try of the game.

The game looked to be heading all Gloucester’s way but with just five minutes until half-time Ben Ward’s men finally got some points for their time spend in Gloucester’s 22. A great break from David Johnston to get Ealing inside Gloucester’s 22, before the ball was fed back to Cian Kelleher who powered his way over the line dotting down for Ealing Trailfinders first try of the afternoon.

Kelleher’s try seemed to give Trailfinders that extra confidence and with just a minute left on the clock another spell of sustained pressure saw Max Northcote- Green dot down for his first Ealing Trailfinders try to close the gap going into half-time.

Just moments into the second half, another strong start from kick-off led to sustained pressure as the home side found space on the wing, the ball being fed back inside to Ben Meehan to dot down.

Gloucester’s fast start was soon for nothing as a loose pass across their back line at halfway saw fresh off the bench Max Bodilly intercept, kicking the ball forward it bounced up for him perfectly to collect and race home for the travelling sides third try of the game.

In what was becoming a very end to end affair Gloucester once again put points on the board after multiple pushes for the line saw the home side awarded a penalty try, with Trailfinders collapsing the maul inside the 5-metre line.

Gloucester extended their lead once again mid way through the second half, after several drives for the line, the ball was fed out to the backs with Jake Morris fresh off the bench, to dot down in the corner.

Trailfinders were going to lay down and take it though as debutant Tadgh McElroy scored at the back of a driving maul form hus own line out 5 metres out.

The West Londers were once again on the scoresheet moments later as Max Bodilly turning and twisting inside Gloucester’s 22 dotted down for his second try of the game.

Not the end result that Trailfinders were hoping for, however a lot learnt against stern Premiership opposition in Gloucester Rugby.