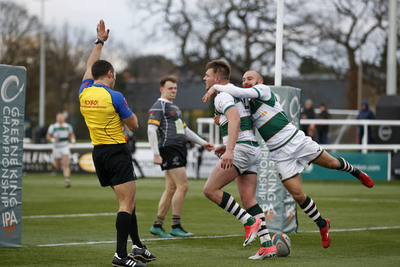 Ealing Trailfinders stormed through to the semi finals of the Championship Cup with a dominant 41-10 victory over Nottingham at Trailfinders Sports Club.

The West Londoners scored five tries and thoroughly deserved the win as Lewis Jones, Harry Sloan, Jordan Burns, Matt Cornish all crossed the line as well as a penalty try to set up a home semi final in three weeks time.

Nottingham took an early lead as former Trailfinder Shane O’Leary kicked them in front after 10 minutes, but from then on the hosts dominated the first half to work their way in to a commanding lead.

The scrum was giving them a superb platform to attack, and after a penalty was awarded Laurence May kicked to within five metres of the try-line. Three successive penalties were then given to the Trailfinders as Nottingham continued to bring the maul down, and eventually the referee was forced to go under the posts to give the hosts a penalty try. Shane Buckley was also sent to the sin bin in the process, giving the West Londoners a man advantage for 10 minutes.

The Green and Whites took full advantage of having an extra man, and May kicked a penalty from 30 metres out just before the half hour mark to extend the lead to seven points.

Lewis Jones then crossed the try-line for the second consecutive week as the Trailfinders continued to dominate before half time. A penalty was kicked to the corner and a set play saw the backs get the ball straight from the lineout, eventually being spun wide to Jones who was there to stretch over in the corner. May added an impressive conversion to give his side a 17-3 lead as half time approached.

The confidence was clearly flowing for the hosts who were playing expansive rugby from anywhere, and they came within inches of a wonder try in the closing stages of the half. Seb Stegmann gathered a high ball and passed to Jordan Burns who straightened up the line before releasing Matt Cornish down the wing, but in the process of scoring he was dragged in to touch.

Ben Ward’s men saw out the final minute of the half and kicked in to touch to run down the tunnel with an impressive 17-3 lead at the break.

The Trailfinders showed no signs of slowing down after half time and came out with the same intent as the lead continued to grow. Harry Sloan got the hosts’ fourth try of the match on the 50 minute mark as they began to put themselves in an unassailable position.

A maul was brought down just short of the 22, and the centre powered his way through three defenders to run clear and dive over the line. May again converted to put the lead up to 21 points.

Ward’s side kept their foot on the gas and crossed again 10 minutes later to put the result beyond doubt. Lewis Jones who picked up the Man of the Match award broke in the midfield and ran through from 30 metres before unselfishly offloading to Jordan Burns who was able to dot the ball down. The conversion from May took the hosts over the 30 point mark.

Nottingham responded well and got a try as the teams entered the final quarter courtesy of David Williams who latched on to an offload from close range to score, and O’Leary converted but the Trailfinders then added further gloss to the scoreboard in the following moments.

A penalty was kicked to the corner and from the resulting maul Matt Cornish broke away to score, before another conversion from May gave the Trailfinders a 38-10 advantage.

Craig Willis added another three points from the tee with the final play of the match to take the hosts over 40 points, and that signaled the final whistle as the Trailfinders booked their place in the semi finals of the Championship Cup.