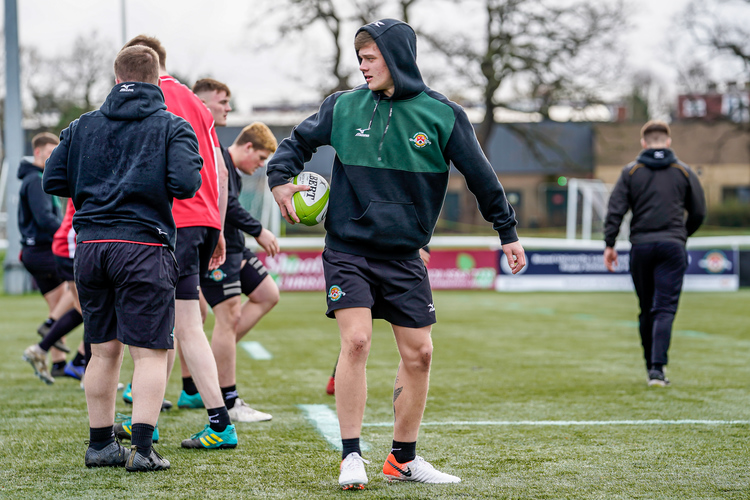 Ruben Moxham is a man on a mission after failing to make the cut at Bath last year, only to later discover his career had been hindered by a misdiagnosed back condition.

Moxham, 19, flew through the ranks at Bath, captaining their Beechen Cliff School-based AASE side and featuring in the same U18s team as close mates Gabe Hamer-Webb and Max Ojomoh, along with budding stars like George Worboys, Nahum Merigan and Xavier Hastings.

However, his progress stalled and it was not until he joined the Ealing Trailfinders Academy in the summer of 2019 that the reason became apparent. Moxham explained: “On my first day of training with Ealing Trailfinders, the physios discovered I had spondylolisthesis, a spinal condition on my L5 vertebrae – in other words, I’d been playing with what amounted to a broken back.

“I did it during pre-season with Bath in 2018 but the physios there thought it was a muscle injury and then as the pain got worse, they said it was a mental thing. But it prohibited my progression and while everyone else was developing, I couldn’t keep up. I captained Beechen Cliff all season and played every minute, but I couldn’t play to my potential and got released.

“It came as a shock when I got to Ealing Trailfinders and was told I might be out for a year, but I got stuck into my rehab and set new goals. I thought I might have peaked during my school career and began to doubt myself, but once my injury was diagnosed, I realised I could make up for lost time. There were some really dark moments but I knew I was once again on the right path.”

Bath born and bred, Moxham excelled at football and was part of Southampton’s academy, along with Hamer-Webb, before the rugby bug took over at 13. He said: “Gabe and I were decent footballers and I played centre-mid, but I always preferred rugby. I was training at Southampton five times a week but wasn’t enjoying it, so my dad backed me and I have no regrets.

“Although I’ve had a setback, I’m in the best place now and the Trailfinders Academy is even more professional than Bath’s. After waking up pain-free for the first time last November, I got back playing for Brunel University in February and I’ve set myself a three-year target to get into the Premiership. I’d love that to be with Ealing Trailfinders because we share the same ambitions.”

Moxham’s determination shines through, as he adds: “During my rehab I put on 12 kilos of muscle. I’m up to 92kgs (14st 7lbs) now from 80kgs (12st 9lbs) and I’ve got lots more physical development in me and know what my potential is – I want to label myself in future as a physically dominant, distributing No.12, a bit like Owen Farrell is when he plays there for England.

“I like Henry Slade’s fluidity on the ball as well and he sees space really well, so if I can combine the two and be that physical presence at 12, that’s my goal now.”