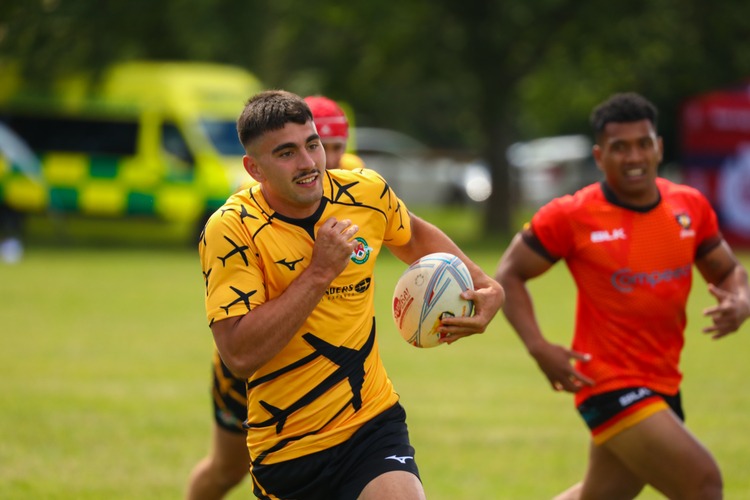 Ealing Trailfinders Rugby Academy have participated in the Super 7s Series in recent weeks, taking on established veteran players as part of a challenging pre-season schedule.

The Academy took part in five tournaments in total, from the Midlands to East Anglia and the South-East throughout June and July, taking on a number of established teams such as Samurai RFC, The Army and Ramblin Jesters. The young Academy side impressively reaching the knockout phases in every outing and losing to the eventual winners each time, fielding a side who had never played together before the start of the series.

Trailfinders kicked off their summer of rugby by advancing to the semi-finals at the floodlit Rosslyn Park event in preparation for the four-legged UK Super 7s Series over the following month.

In their first time taking to the field together, the team maintained their form throughout the series which culminated in a semi-final exit at the hands of Samurai RFC in Bury St Edmunds, raising their rank to 7th nationwide amongst the 22 7s sides in the process.

Gabe Jones, a fresher within the Academy, believes the tournaments were a fantastic opportunity to show the side’s talents against international-calibre players.

“We started with advancing to a semi-final at Rosslyn Park, and to finish in one showed that we didn't drop off and that we really are a good side. Playing teams like Samurai and Jesters, who had some really good players and were a lot more experienced, we came in with no real fear as a young side and we did ourselves proud in all the Super 7s series.

“Obviously it is a lot more physical than I’m used to, but I really enjoyed it- it was a great experience and in the next few years we’ll be aiming to win a few tournaments.”

Jones, who joined the setup eight weeks ago before the 7s tournaments commenced, has stated that the level of coaching within Trailfinders has eased the step up from school-level rugby to the Academy.

“The last few weeks with Kieran Campbell have been really good, along with Paddy Gill and James Brooks as well in the morning sessions- they're really on to us with our skills and it’s pushing us all.

“Having a coach of his calibre coming in really helps all the boys and it does try to raise us to that next level, so that hopefully if we get a chance at the first team in a couple of years, we’ll be ready for that step up.”

The team, led by former England 7s star and current Academy skills coach James Brooks and accompanied by Brett Wilkinson and Head of Academy Paddy Gill, were coached to the cup semi-finals of the London Floodlit 7s and lost 31-10 to eventual winners Ramblin Jesters.

This was closely followed by a cup quarter-final finish two days later in the opening leg of the Super 7s Series at Aldershot Military Stadium, with Trailfinders recording a win, loss and draw in the pool stages before narrowly missing out to Samurai RFC in a 19-17 defeat.

Trailfinders achieved a plate final berth on their travels to Newbury against none other than newly anointed back-to-back Olympic Gold medalist and Bristol Bears star Semi Radradra and his Wooden Spoon Marauders, eventually losing 29-24 with the Fijian star assisting the winning try.

Star performer and third year member of the Trailfinders Academy squad Matt Dalrymple believes that playing against such talent “can only serve them well” and the 7s format was “a good introduction to the game” for younger members of the team.

The Army Rugby Union 7s ran out as close victors in a 32-26 win against Trailfinders Academy in the cup quarter-final in Nottingham two weeks later, as the Academy went one better in the succeeding leg at Bury St Edmunds and reached their first semi-final in the Super 7s series, losing out to Samurai RFC for the second time.

“It was a nice way to finish, getting to a semi-final in any tournament on the circuit is a pretty good effort,” declared Dalrymple.

“Obviously we wanted to get a bit further, but coming up against a side like Samurai, they are a class outfit and their knowledge and ability in the game got them through.”

Dalrymple’s knowhow proved vital in Trailfinders’ progression through the legs of the Super 7s Series, and the task of taking to the field in such extreme temperatures may prove pivotal in securing vital wins next term.

“Even in 7s rugby, we felt we were beating teams because we were better conditioned than them, where they’d blow out after four minutes of the first half and we were still going strong. Come winter time, it can only really put us on the right foot and close out tight games, and give us those wins that may have been losses if we had been 10% less fit.”

The former member of the London Irish Academy believes there has been abundant progress in his time with the Academy both personally and as an organisation, particularly with the likes of Elliot Chilvers being awarded with a first team deal recently.

Like fellow teammate Jones, the fly-half believes new coaching additions will only further develop the Academy.

“When I joined I suppose it was only 12-15 of us and pre-Covid, we were having breakfast and lunch with the first team; whereas now, I think there’s probably up to 100 boys.

“I think it helps being a third year also, you understand how things run and working with Paddy Gill, I can understand what he wants more. New additions like Brooksy (James Brookes), Brett (Wilkinson), and Tom Brown, the coaching staff is getting bigger, the gym is getting better as is the Strength and Conditioning staff.

“Chilly (Elliot Chilvers) was awarded with a first team deal, and it just shows what is possible through this programme given that a lot of the boys here have aspirations to get into that first team setup.

“It is about taking one step at a time, getting into that senior training setup and impressing enough to stay there for the rest of the preseason, and come crunch time, getting that final deal. It’s a growing program and it’s a big attraction to have, and it’s only going to get bigger and better.”