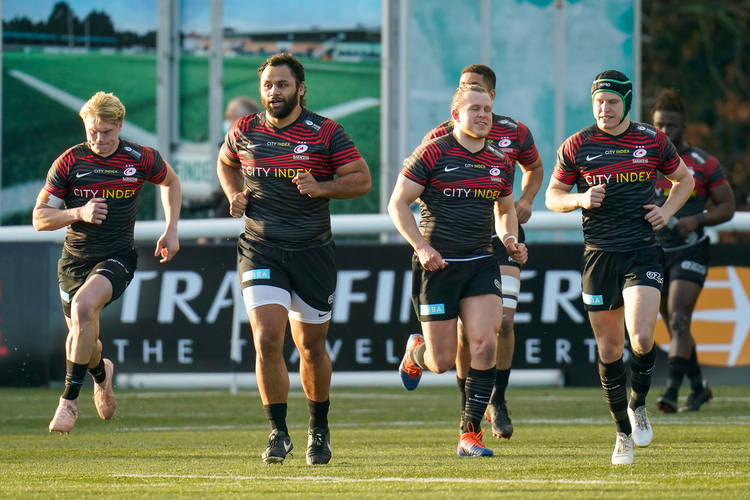 Saracens stand in the way of Ealing Trailfinders’ bid to reach the Gallagher Premiership for the first time. We take a look at their season so far.

Mark McCall’s men are looking to bounce back into rugby’s top tier after being relegated last season due to financial misconduct, with the first leg of the Greene King IPA Championship taking place next weekend at Trailfinders Sports Ground.

Here’s all you need to know about our opponents’ campaign in the Championship.

Saracens arrival to the Championship couldn’t have gotten off to a rockier start as the visitors docked in Cornwall and left with nothing after a visit to the Pirates, resulted in a 25-17 defeat.

Their biggest challenge yet came in the form of Trailfinders in late April at the StoneX Stadium, maintaining their five-game successive win streak in a 48-20 win and sharpening their focus on a promotion bid. McCall’s side were strengthened by that point by their returning International stars from the Six Nations campaign.

Sarries continued their momentum with three more bonus point wins, the latter of which, a 73-0 win over Coventry, secured their place alongside Trailfinders as the competitors for a place in the Premiership amongst a lingering Doncaster Knights.

Saracens, no stranger to play-off rugby, have finished in the top four of the Premiership every year of Mark McCall’s decade long tenure in the top flight.

McCall, entering his twelfth year with Saracens, boasts an impressive resume in his time spent as Director of Rugby of the club.

The northern Irishman has won an unrivalled five Premiership and three European Champions Cup titles with Sarries, with an LV Cup to boot.

Potentially making the leap back into the first tier of rugby at the first time of asking, has certainly been a unique challenge for McCall’s side.

McCall said of Trailfinders after his side’s road victory in the Championship in May, "These Championship games are physical. Ealing are a mid-table Premiership side in my opinion.”

The DoR and nine other backroom staff, including head coach Joe Shaw and head of recruitment Nick Kennedy, recently extended their contracts with the club up until 2025.

Trailfinders secured their first win over Saracens on their way to winning the inaugural Trailfinders Challenge Cup, in their first competitive game since February 2020.

It was the first time the sides have met, with England star Billy Vunipola in action at Trailfinders Sports Ground and England coach Eddie Jones in attendance.

An Alun Walker brace and Angus Kernohan try proved the difference with the hosts finishing just one try shy of a bonus point victory.

Will Hooley’s last-minute conversion of Tom Woolstencroft’s try earned Saracens a losing bonus point of their own.

Trailfinders were able to complete the double over their London rivals at StoneX Stadium with a more convincing 39-26 win to get one hand on the Trailfinders Challenge Cup.

The win all but etched the Green and Whites’ name on the Challenge Cup, with Ben Ward’s side bagging a five try bonus point win in a stunning display of dominance.

The sides traded blow for blow with two tries each in the first period, courtesy of Sarries’ Dom Morris who was at the double and Trailfinders’ Rayn Smid and Will Davis respectively.

Second half tries from Trailfinders’ Dean Hammond, Pat Howard and Shaun Malton cancelled out Ritomi Segun’s try and propelled the visitors to a famous victory.

Trailfinders fortunes reversed in their first league encounter with Mark McCall’s side in north London.

International Owen Farrell was able to chip in with an impressive 23-point contribution.

Trailfinders replied with tries of their own by way of a penalty try awarded by referee Craig Maxwell-Keys in the first half, alongside Shane Buckley’s five points.

Since their opening day loss to the Pirates in Cornwall, Saracens have gone on an unprecedented eight match bonus point victory run, overcoming the likes of Ealing Trailfinders, Doncaster and Coventry in the process.

Two of these victories boasted a clean sheet, with Saracens the only side to achieve the feat in the Greene King IPA Championship this season.

Saracens have recorded 50+ points in five of their last six wins, boosting their points difference to just one shy of Trailfinders’ +344.

Their most recent victory came over the latter in ‘ruthless’ fashion, in the words of Mark McCall when speaking to Saracens official website, triumphing 73-0 on their travels at Butts Park Arena.

Mark McCall recently voiced his satisfaction with the progress of certain players while adapting to life in the Championship.

“It has been quite interesting because us not having our loan players here and the international players not available has really opened up a window of opportunity for quite a few players, to be honest.

“Andy Christie and Sean Reffell in the back row have had a lot of game time and they have done exceptionally well.

“We have had KP at hooker (Kapeli Pifeleti) who has played for us when Tom Woolstencroft was injured.

“Callum Hunter-Hill is back from a really bad injury, Sam Crean, Dom Morris has stepped up, he has had a really good year.

“There is a lot of good young players who have come through our academy that we are very excited about.”

McCall boasts a plethora of international talent within the ranks, with the club still being the most represented club in the Lions squad announcement despite their second-tier positioning, with Elliot Daly, Owen Farrell, Mako Vunipola, Maro Itoje and Jamie George making up the selected quintet.

England captain Farrell is second only to Jersey Reds’ Brendan Cope in overall points and point from the boot, missing out on top spot by a mere point the latter rankings.

Full-back Alex Goode also returned from his season-long loan in Japan with NEC Green Rockets in time to aid their Championship promotion chances.

The versatile back left for the Far East last October in wake of Saracens relegation, but took to the field against Ampthill and Coventry and will be available for the two-legged promotion play-off in June.

While Trailfinders’ captain Rayn Smid leads the league in tries (9 tries), two Saracens players are represented in the top five try scorers in the league.