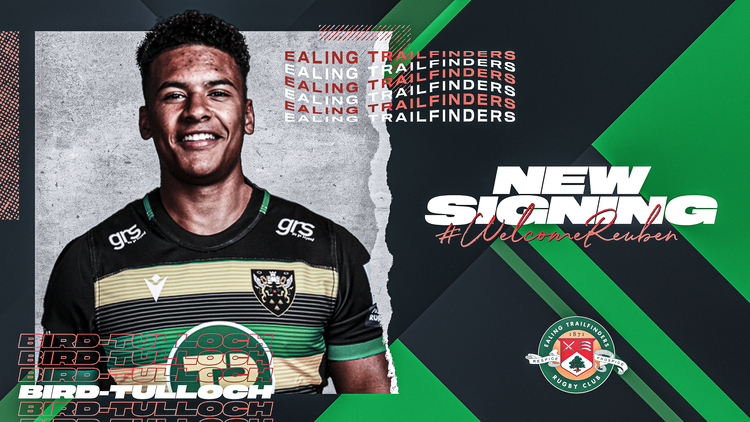 Ealing Trailfinders are excited to announce the signing of Reuben Bird-Tulloch from Northampton Saints, joining the club ahead of the 2021/22 season.

The 22-year-old, 5 ft 10” Centre, will join Ben Ward’s side after a spell at Northampton Saints which saw him make four appearances.

The English-qualified centre was part of the Academy set-up at Saracens since the age of 13, also captaining England at both Under-16 and Under-17 level. Bird-Tulloch also represented England Under-18s during the 2016 Five Nations Festival.

After joining Northampton from Saracens academy in 2019, Bird-Tulloch went on to make his debut in the Premiership Rugby Cup before earning his Premiership debut in the 27-3 victory over London Irish following the restart of rugby in 2020. Since then, he has spent time on loan at Championship outfits Ampthill and more recently Bedford Blues this season.

Speaking on his move Bird-Tulloch expressed his excitement for a new challenge.

“I’m massively excited for the opportunity to join Ealing Trailfinders and hopefully help contribute to the team moving forward. It looks like an ambitious and exciting place to be, which is great especially for a young player like myself and I can’t wait to get going during pre-season.”

“He’s an exciting young talent, who’s going to give us great options in the midfield going into the new season. Reuben has shown great ability in his time at both Saracens and Northampton, and since then with his loan spells in the Championship. We can’t wait to see what he can achieve at the club over the coming years.”