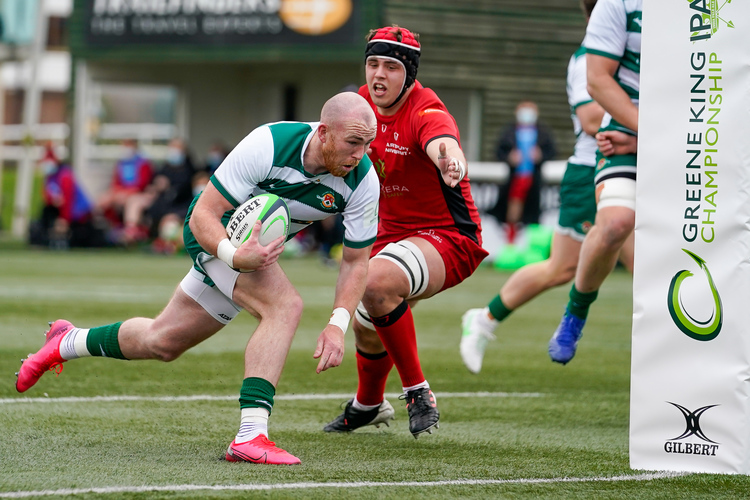 Ealing Trailfinders will open their Championship campaign against Hartpury on September 18th at Trailfinders Sports Club.

Off the back of a scintillating win against Gloucester last weekend, the club are looking forward to welcoming fans back to Vallis Way in the first round of the league season.

Ben Ward’s side aim to start off the season in the best way possible in hopes of reaching the Gallagher Premiership come next April.

The men in Green and White will look to extend their unbeaten six-game league record against the Gloucestershire outfit since the latter’s promotion from National League 1 in the 2016-17 season.

Hartpury finished ninth in last season’s Championship season, their best finish since their promotion to the division for the first time in 2017.

The university side recorded two wins in the curtailed season, coming against basement club Richmond on the opening day in a 38-15 win and a narrow 15-13 home victory against tenth-placed Nottingham, courtesy of a last-gasp Max Clementson try.

Ealing Trailfinders recorded a resounding 75-19 win against this year’s opening day opponents, with the defeat heavily contributing to the side’s final -132 points difference.

The four points picked up against Nottingham preceded a four-game losing streak, with two bonus points against Ampthill and losses to top six outfits Coventry, Cornish Pirates and Jersey.

A final day matchup with Saracens was cancelled due to an outbreak of coronavirus in the camp of Hartpury, resulting in no league points awarded to either side- certifying both Hartpury’s ninth and Trailfinders’ first placings in the 2020/21 Championship.

Hartpury’s challenging pre-season schedule against Ospreys and Bristol Bears begins this Saturday (4th) against Toby Booth’s men ahead of the trip to West London.

Barnes is approaching a decade in charge of the university side, overseeing the success of two promotions during his tenure.

Promotion from the National Division Two South in 2013/14 and then again up to the Championship in 2016/17 while remaining unbeaten added to an already impressive ascent up the English rugby structure.

The college maintained an improved league position in every year of their 17-year existence until the 2018/19 Championship season.

While unable to crack the top half of the Championship yet, Barnes has stabilised the ALPAS Arena side as a regular fixture in the second tier over the previous three seasons.

Hartpury have announced a sizable 15 new additions to their squad, including seven loan moves from partner club Gloucester Rugby.

With prop Conor Maguire arriving on a permanent deal from the Cherry and Whites and Harry Short being promoted from their academy, Hartpury also boast two new recruits from West London in Oli Robinson and Jack Tovey.

Xavier Hastings arrives from the academy setup at Bath Rugby having featured for England U18s and 20s, Tommy Mathews from Northampton Saints, and Jean-Baptiste Bruzulier and Charlie Foley from Cornish Pirates and Doncaster Knights respectively.

Former Trailfinder Seb Nagle-Taylor moves the opposite way in a permanent deal to Gloucester, while London Scottish have acquired a trio of Nick Selway, Ehize Ehizode and Angus Southan.

Jack Johnson is another squad member to move up to the Gallagher Premiership with Worcester, while Ervin Muric transfers over to French third division side RC Suresnes.

Max Clementson and Will Safe take the step down to National League 1 with Chinnor and Birmingham Mosely respectively, while Cam Roberts moves to Surrey side Esher.

Accomplished centre and former Vallis Way resident Jack Tovey makes his return to take on his old side after two years in West London.

Tovey, who spent the final year of his nine seasons with Bristol as a dual-registered player at ALPAS Arena, will look to impress after his transfer to Gloucestershire this summer.

Recipient of the 2018 BUCS Super Rugby Player of the Year award with Northumbria University Oli Robinson, another member of Trailfinders’ 2020/21 squad, could also make the visit back to Trailfinders Sports Club.

Winger Benjamin Foley was the joint fourth-highest try-scorer in last season’s Championship with six, while teammate Joshua Bragman ranked seventh in the top points scorers of the division with 54.

Trailfinders secured their second largest win of last season against Hartpury on their way to the Championship playoff final in an 11-try rout at Trailfinders Sports Club back in March.

The visitors remained in the tie at the break with converted tries from Joshua Bragman and Will Partlington keeping their side within a respectable distance at 28-14.

Nevertheless, a second-half masterclass featuring the likes of former Hartpury captain Linsell and Burns saw Trailfinders prevail as the truncated season meant the sides met only once.

Secure your place at Trailfinders Sports Club on September 18th by booking your tickets here.