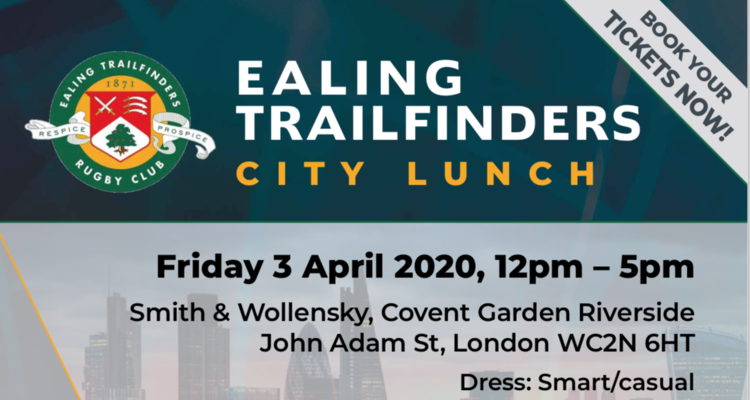 Ealing Trailfinders are delighted to be launching our first ever City Lunch in another exciting step forward for the club.

On Friday 3rd April at Smith & Wollensky restaurant in Covent Garden we will be hosting a drinks reception, three course lunch and an auction to raise funds for The Motor Neurone Disease Association and London’s Air Ambulance Charity.

Hosted by Jonny Gould, David Flatman will be the Guest Speaker sharing a whole host of entertaining stories from his career which included representing England, Saracens and Bath. The former front-rower is one of the most recognisable pundits in the sport and has strong views to spark plenty of debate.

Proceeds from the day are being split across our Community Club giving players aged 5-50+ the opportunity to play rugby plus two very important charities.

In light of recent rugby players Doddie Weir and Rob Burrows being diagnosed with Motor Neurone Disease as well as Joost van der Westhuizen who lost his battle in 2017, we are determined to support the charity and would encourage the rugby family to join us.

The Motor Neurone Disease Association funds and promotes research to understand what causes MND, how to diagnose it and, most importantly, how to effectively treat it so that it no longer devastates lives. They are the only charity in England, Wales and Northern Ireland focused on improving access to care, research and campaigning for those people living with or affected by MND.

They serve the 10 million people that live work and travel within the M25, treating an average of five patients every day.

Tickets are £90 per person which reflects great value for what will be a fantastic afternoon, to book tickets and tables contact events@snapsponsorship.com or phone 01483617222.