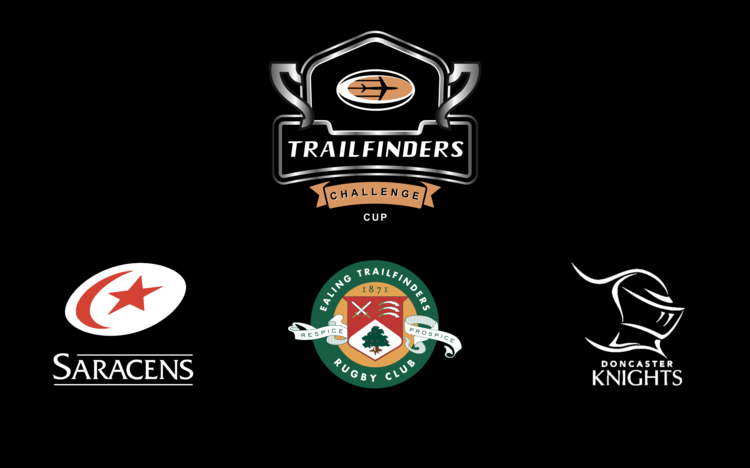 Ealing Trailfinders, Saracens and Doncaster Knights are pleased to announce they will take part in an exciting pre-season tournament ahead of the 2020/21 Greene King IPA Championship.

The inaugural competition has been made possible by the generosity of Mike Gooley and Trailfinders, who are providing the prize money for what will be a truly competitive event with a trophy on the line. Trailfinders are providing 27k across the three clubs to cover the operational costs of the tournament and 40k prize money of which the winners will take home first prize of 20k.

The trio of clubs will go head-to-head in the Trailfinders Challenge Cup, a round-robin competition which will last six weeks beginning on Saturday 16th January.

Each team will play each other home and away with the usual points system for wins, draws, try bonus points and losing points in place.

Following the competition of four matches each, the top ranked side will be crowned Trailfinders Challenge Cup champions and presented with a trophy.

All games in the tournament will be streamed live to ensure supporters of all three clubs can enjoy access to these important pre-season fixtures.

“Ealing Trailfinders Director of Rugby Ben Ward said: “We are delighted to be playing in the Trailfinders Challenge Cup. To have competitive rugby and a trophy up for grabs will give us a real focus over the coming weeks.

“Saracens and Doncaster have both been in training for a while and we are all desperate to play rugby and get games under our belt before the league season starts. The games will be exciting to watch and we want to show the quality that is on show in the Championship.

“Thanks to Mike Gooley and Trailfinders for offering to cover all associated costs to make this event possible. As sponsors of the Trailfinders Challenge Cup, their generosity has given us a new opportunity and we can't wait to get out there and play on the 16th January.”

Doncaster Knights Director of Rugby, Steve Boden, said: “We are really excited to be playing rugby again and especially looking forward to the chance to test ourselves against such high-quality opposition.

“After just seven weeks of training, this competition will be a huge challenge for us, but one that will provide plenty of learning opportunities for our young group and showcase the quality and talent within the Greene King IPA Championship”

Saracens Director of Rugby Mark McCall said: “We’re delighted to be playing in the Trailfinders Challenge Cup ahead of the new season and thankful to those who have made it possible.

“The challenge of playing Doncaster Knights and Ealing Trailfinders in competitive fixtures is one we’re looking forward to and will be ideal preparation for our squad for the season ahead.”

If points are even at the end of the tournament, a points difference approach will be used to determine the winner.