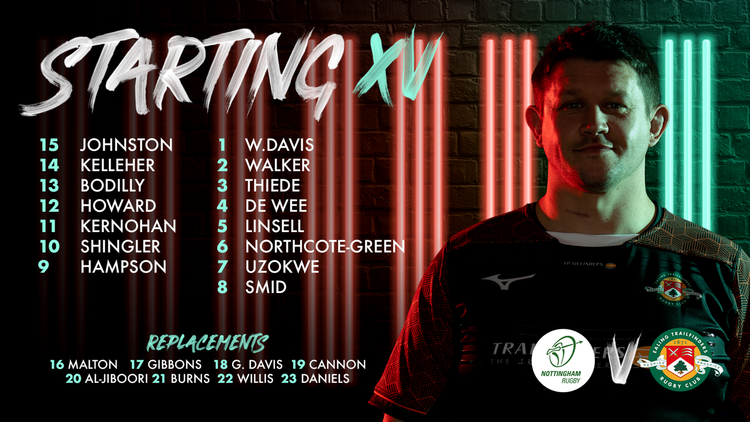 After no game for 34 days due to two postponed fixtures and a bye week, Ealing Trailfinders look to fire back into action on Friday night, travelling north to face Nottingham Rugby at Lady Bay.

The Trailfinders coaching team have made eight changes to the starting 15 that lined up away against Richmond in the West Londoners last Championship clash.

In the front row, Will Davis and Lewis Thiede will be packing down with returning Hooker Alun Walker, who is set to make his first appearance in almost a year after a long term injury.

At lock, Bobby de Wee is once again partnered by Simon Linsell, with two changes in the back row seeing Rayn Smid and Max Northcote-Green return to partner in-form Simon Uzokwe.

The half-back pairing of Craig Hampson and Steven Shingler return as Jordan Burns and Craig Willis drop to the bench. In the midfield, Pat Howard returns to the starting 15 to feature alongside speedster Max Bodilly.

The back three sees Cian Kelleher and David Johnston retain their starting places, with Angus Kernohan replacing Luke Daniels on the wing, who drops to the bench.

Nottingham came into the fixture off the back of two losses on the road, falling to a 20-15 defeat at Ampthill on December 18th, followed by a narrow 30-26 loss at Hartpury on January 3rd. Craig Hammond will be looking for his side to bounce back in front of their home supporters.

Ealing Trailfinders return to Championship action after a month of no played fixtures, their last run out away against local rivals Richmond on December 11th. In a thrilling encounter, Trailfinders went in at the break 17 points down, before a spirited performance and three tries in 10 minutes spurring on a comeback to run out 24-33 victors.

Nottingham travelled to Trailfinders Sports Club in Round 4 of the Championship season, looking to cause an upset. However, a fighting performance from Ben Ward’s side saw the men in green and white run out comfortable 78-19 victors with tries from Uzokwe, Smid, Howard, Malton, Walker, Hampson, Campher, Bird-Tulloch and Burns.