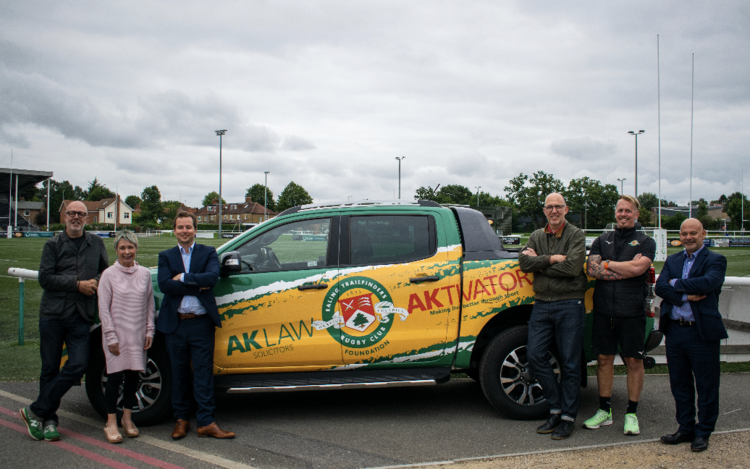 The new truck nicknamed "The Aktivator" which will help the Foundation Team move essential equipment to and from a range of events including Training Camps, School workshops, and Community Projects, has been provided by club sponsor AK Law. The local law practitioners are a solicitor-led law firm specialising in all aspects of Commercial Property, Residential Property and Litigation, based in Ealing.

The truck’s design has been planned and implemented by local branding business Raw Brothers, who have kindly donated their time and resources to the project which will help us continue our range of community projects across West London.

Milton Andreou, Partner at AK Law, has spoken of his delight to support the Foundation.

“As a law firm we feel connected to the community in Ealing and we’re really proud to be associated with the community efforts made by the club through the Ealing Trailfinders Foundation and it’s something that we wanted to support, helping the projects across West London.”

Head of Community at Ealing Trailfinders, Danny Harlow is grateful to have received the vehicle for his teams use.

"It's with great thanks to Milton Andreou and Tom Roberts the Partners at AK Law who have made this possible. Their generosity to helping the Community department means a lot to us and will support us in both moving our equipment around the local area whilst helping to support our vision of 'making lives better through sport'. The truck has been wrapped by Andy and Richard Ward at Raw Brothers to make the new vehicle stand out, so also a big thanks to them for their hard work from concept to delivery.”

Andy Ward, co-owner of Raw Brothers, was more than pleased to have helped with the partnership.

“We’ve been a part of the Ealing business club for a while now, we got talking to the guys at AK Law, who wanted to support a local community project and we got involved as a creative agency. We helped them come up with the idea of providing a truck for Ealing Trailfinders Foundation and then the design of wrapping the truck, linking Ealing Trailfinders with AK Law and I think it looks great.”

The truck has already been put through it’s paces with a busy first month of use, helping to bring lunches to the holiday activity camps across West London and food funding from Hammersmith & Fulham council, at the Linford Christie Stadium.

Watch out for the new Aktivator Zone at Trailfinders Sports Club, which you’ll see here on matchdays.