Ealing Trailfinders 2021 - The Year in Review 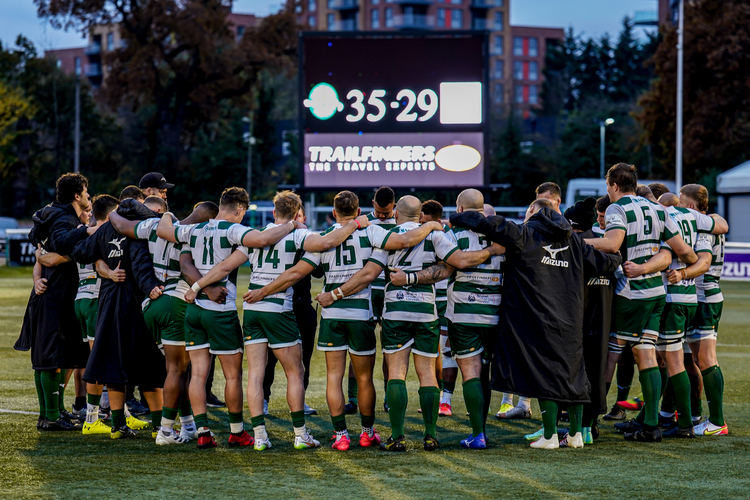 We look back on the last year at Ealing Trailfinders Rugby Club, a year that saw Playoff finals, new arrivals and the return of fans to Trailfinders Sports Club.

The year started with the announcement of the Trailfinders Challenge Cup, a pre-season tournament involving Ealing Trailfinders, Doncaster Knights and Saracens with a trophy and prize money on the line. On January 16th, it was time for Trailfinders’ first match of the year, and it was one to remember. They welcomed three-time European champions Saracens to Trailfinders Sports Club and won the game 27-26 with two tries from Hooker Alun Walker. Next up was Doncaster, as Ben Ward’s men travelled to Castle Park and secured a resounding 26-46 victory making them two from two in the competition.

In February, it was the turn of Ealing Trailfinders to visit the StoneX Stadium. They proved that the result a month earlier wasn’t a fluke as they went away and beat Saracens in a thrilling game 26-39. They went on to secure the Trailfinders Challenge Cup with a 100% winning record, beating Doncaster at home in the final match, followed by a socially distanced trophy presentation.

The shortened Championship Rugby season got underway in March, a year after the league was stopped due to COVID-19. The men from West London went unbeaten in March with league victories over Nottingham, Ampthill, Coventry and Hartpury, leaving them top after the opening four rounds.

A challenging set of fixtures lay in wait in April for the Trailfinders, with matches against Cornish Pirates, Jersey Reds and Saracens. They built momentum with victories in their first two games before visiting the StoneX Stadium for the second time this year, a Saracens side littered with international stars such as Maro Itoje, Billy Vunipola, and Owen Farrell proved too strong, which resulted in Ealing Trailfinders’ first defeat of the year.

April was also the month that Ealing Trailfinders launched their Trailfinders Trojans programme, an ambitious project looking to grow women’s rugby in West London. It saw Trailfinders partner once again with Brunel University and Henley College, to provide a comprehensive women’s academy system to lead into an elite first team eventually.

At the end of the month, Ealing Trailfinders stood with the rest of the sports community in fighting online abuse by taking part in the social media blackout.

May was another unbeaten month for Ealing Trailfinders with wins over Richmond, Bedford and Doncaster. The victory over Doncaster Knights at Trailfinders Sports Club was an important one; it secured a place in the Championship Play-off final.

A Q&A evening for the fans was also hosted in May, with the play-off final on the horizon. Director of Rugby Ben Ward and club captain Rayn Smid were asked several questions by supporters covering many subjects, including the push for Premiership promotion.

Ealing Trailfinders play-off final opponents were Saracens; the final was played over two legs for a place in the top division of English rugby. Unfortunately, the international firepower in the Saracens ranks proved too strong for Trailfinders, and Saracens ran out of winners in both legs.

Trailfinders Rugby Academy visited The Royal Navy for a team-building day during pre-season to build connections and relationships between the squad, going into the new season.

Academy player Olly Frostick was also named in Scotland U20 squad for their Six Nations campaign, making three appearances throughout the competition.

In July, Kieran Campbell made the switch from Ireland to England, moving from Ulster to West London to take up a new coaching role with the Trailfinders.

The Trailfinders Rugby Academy played in the Super Sevens Series throughout July; the tournaments were hosted at various rugby clubs throughout the UK. They reached the knockout stages in every tournament and lost to the eventual winners each time.

The Ealing Trailfinders Community department took a group of local school children to visit Twickenham and learn about the history of English rugby.

After a number of new signings were made in the summer, including Cian Kelleher, Reuben Bird-Tulloch and Dylan Smith, an evening was hosted where fans could enjoy drinks with the new players at Trailfinders Sports Club.

Ealing Trailfinders welcomed Premiership opposition at the end of the month as Gloucester visited Trailfinders Sports Club, and not the first time this year, Ben Ward’s men showed they could compete with the top tier of English rugby beating Gloucester 34-29.

Kingsholm was the destination for Ealing Trailfinders final pre-season match as they faced Gloucester in the reverse fixture. The home advantage just about swayed things in the hosts’ favour. Despite a spirited comeback from the West London side, we fell to a narrow 38-36 defeat on the road.

October’s fixtures kicked off with a tough trip to the West Country to face Cornish Pirates, a tight game that finished 15-12 to the Pirates.

A week later though, the Trailfinders returned back to winning ways at home as they comprehensively beat Nottingham 78-19 to get back on track. Further impressive victories against Coventry and London Scottish saw us sit top of the Championship table after six rounds.

Summer signings James Little and Jimmy Roots also joined up with their teammates after completing their season’s in New Zealand.

November saw mixed fortune once again for Ben Ward’s men as victories the clubs first two games of the month against rivals Bedford Blues and Jersey Reds saw the West Londoners keep their place at the top of the table. However, rivals Doncaster Knights would revenge their May loss when Trailfinders visited Castle Park. A tough battle in the roughest conditions seeing the Yorkshiremen run out 22-5 victors in Round Nine.

Autumn also saw the brand new All Weather Pavilion opened, a multi-million-pound investment made by the Sir Mike Gooley Foundation, to enable both children and adults from across London the ability to partake in multi-sport indoor activities at Trailfinders Sports Club.

The end of the year also saw a breakthrough for Brunel University scholar Maud Muir, who made her England debut against New Zealand at Sandy Park in a historic victory for the Red Roses.

Wrapping up the year, Trailfinders took on Ampthill at home, winning 54-17 in front of their home fans, and came back from being down at the break to beat local rivals Richmond at the RAG 24-33. Our last fixture of 2021 was due to be against Hartpury on December 18th; however, a small number of Covid cases within the camp meant that the fixture would have to be postponed until the new year.

Don't miss out on any of the Championship Rugby action at Trailfinders Sports Club by picking up our half-season tickets now starting at just £100! Buy your season pass here