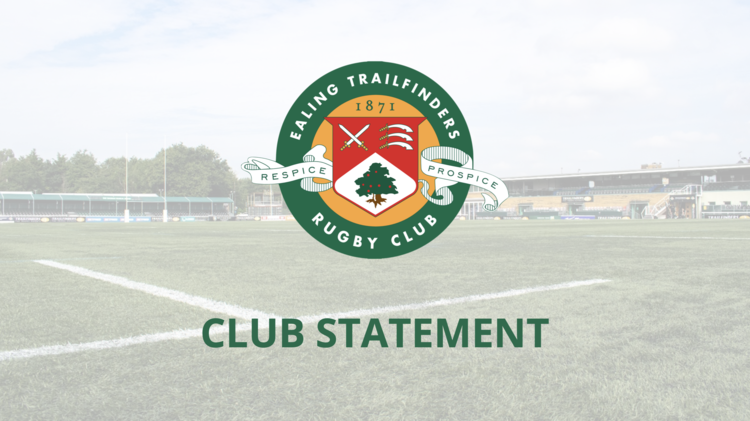 Firstly we would like to thank our loyal supporters and the wider rugby world for the enormous swell of support and empathy following the RFU's disappointing decision.

To be clear, if we win this year’s fiercely contested Championship, we will be appealing the decision and have lodged that request formally in advance. We are confident of a positive outcome to this appeal.

Our submitted audit was not surprisingly based on the revised Minimum Standards Criteria, which focused, post covid, on clubs building financially secure and sustainable models protecting the Clubs, the Premiership and English Rugby.

Because of this shift in focus and positive engagement with key Union decision-makers, we put forward a staged stadium development approach at our home ground, giving us the ability to have 7,500 capacity in Year 1 and build to 10,001 by Year 3. Our accurate assumptions are that our crowds would never be sold out at those numbers in that time frame, therefore having no negative effect on a rugby supporter or any other external bodies.

The plan would develop a financially sustainable way robustly underpinned by our passionate and committed owner. Looking at rugby attendances in the premiership this season, our proposed capacity would not be out of sync with the attendances at many of the Premiership grounds.

In its current format, our ground has hosted a season of Super League Rugby, The Women's Premiership Final and would have hosted England U20 v South Africa U20 (cancelled by Covid).

Our plans to significantly improve our current set up in Year 1 and by Year 3 having a 10,001 stadium despite the events above have been refused.

Interestingly looking at football, a sport we would love to rival on attendances, have a minimum capacity for Premier League entry of 5,000.

Championship Clubs with Premiership ambitions should surely be actively encouraged to develop their stadiums rather than renting other grounds and losing key income lines along the way (food, drink, merchandise, ticketing). Plans and methods should be implicated and encouraged by governing bodies to ensure this happens whilst ensuring no adverse effects to supporters, other clubs, broadcasters etc. Our proposal is detailed, robust and in keeping with the spirit of the revised MSC, and the RFU’s decision is disappointing.

Thank you once again for the support we have received. We hope the climax to the season is an exciting one, with the best team on the pitch picking up the trophy.