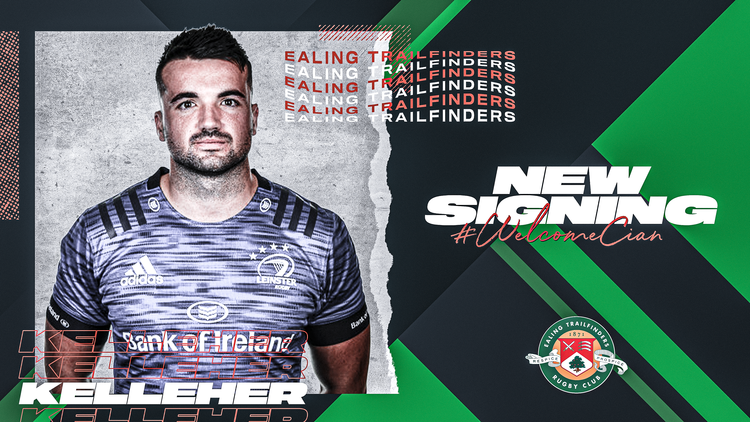 Ealing Trailfinders are delighted to announce the signing of Leinster Winger Cian Kelleher, who will travel to West London to join the club at the end of the 2020/21 season.

Born in Sandymount, Dublin, the 26-year-old will join the Trailfinders after making 26 appearances for the four-time European Champions, scoring 12 tries in the process.

After initially coming through Leinster's academy, Kelleher had a three-year spell with Irish rivals Connacht, before returning to Leinster for the 2019–20 season.

6 ft tall Kelleher has represented Ireland internationally in Sevens. He also played for the Ireland under-20s in the 2014 Under-20 Six Nations and at the 2014 Junior World Championship, scoring three tries in nine appearances. Kelleher made his first appearance for the Irish senior side in an uncapped match against the Barbarians on 28 May 2015.

Speaking ahead of his arrival, Kelleher has talked of his excitement for a new challenge.

“I’d like to thank Leinster Rugby for my time with the club. It’s been enjoyable and particularly getting to play with my brother and best friends once again. They’re memories I’ll cherish.

“The last year has been strange to say the least and it would have been great to have played in front of the supporters in the RDS Arena one more time, but it’s not meant to be. I would like to thank them all for their support of me during the highs and the lows of my time here and the welcome afforded to me on my return.

“I’m really excited by the challenge in Ealing Trailfinders and it’s one I’m relishing over in the UK.

“I’m looking forward to linking up with Ben Ward and with Kieran Campbell joining next season as well, it’s a club with really exciting ambitions that I’m thrilled to be a part of.

“I want to finish my time with Leinster in the right manner and then I’ll look to start a new chapter with Ealing which I can’t wait to get started.”

Ealing Trailfinders Director of Rugby, Ben Ward, is looking forward to welcoming the Irishman on board ahead of next season.

“Cian is a very exciting signing for the club, and he will bring a wealth of experience of playing top level rugby. He has great footwork and the ability to beat defenders which will be exciting to watch especially on our pitch. He had a very successful spell at Connacht before returning to Leinster and I’m delighted that he has brought into the vision and ongoing project at Ealing Trailfinders to sign with us.