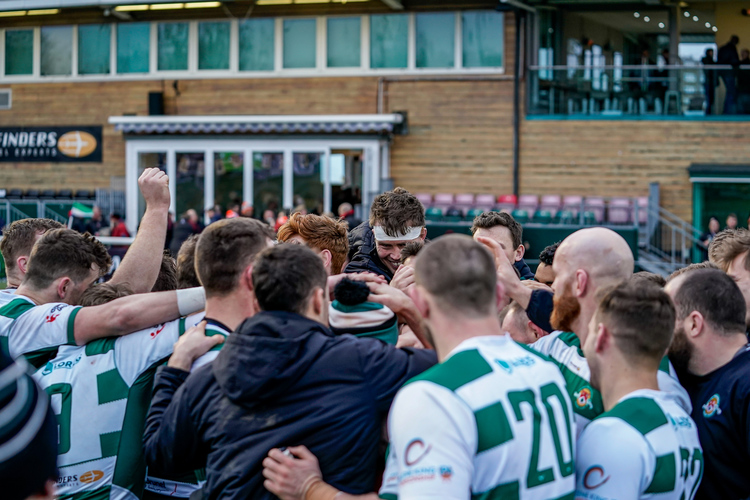 It may have been cut short, but the 2019/20 campaign was still one of significant progression for Ealing Trailfinders.

Two big pre-season victories set the tone for the start of the campaign as they headed in to the Championship Cup matches with a spring in their step. A 73-14 win against Bishop’s Stortford included 11 tries, and the following week a 66-10 victory at Rosslyn Park showed how hard the squad had been working as they edged towards the Cup opener.

In between the pre-season friendlies and the start of the Cup, Ben Ward’s side also had training sessions against England and Saracens. Eddie Jones welcomed the Trailfinders to Pennyhill Park just before their World Cup warm-up against Ireland, and after that they took on the European Champions to test themselves against the best.

A tricky first assignment in the Cup saw the Trailfinders head to Goldington Road to face Bedford Blues on Saturday 21st September, and they came through it with flying colours after an emphatic 57-26 victory in the sun. They scored nine tries in total including braces for both Rayn Smid and Jack Tovey to make the perfect start.

That was then followed by another big win, this time against Ampthill back at Trailfinders Sports Club. Seven tries were scored by the hosts to get another bonus point win, with the scoreboard showing a convincing 43-5 after the 80 minutes.

The final match of the Championship Cup block saw the Trailfinders head to Coventry, and they had to show all of their resilience to grind out a crucial 22-17 win. Kieran Murphy, James Cordy Redden and Rayn Smid all crossed the line but it was the defence that secured the win after soaking up a huge amount of pressure in the final quarter. That win put the West Londoners top of the Cup pool with three wins from three as the league then took centre stage.

The opening match of the league campaign meant a trip to Penzance to take on Cornish Pirates, and the Green and Whites were left disappointed after a frustrating 30-10 defeat meant that they started with a reminder of how difficult the division can be.

The response however was impressive as they got back to winning ways with a 52-38 victory over Jersey Reds. They raced in front to lead 33-0 at half time after a superb opening 40 minutes, and despite a late comeback from the Channel Islanders it was the Trailfinders who beat their rivals to move up the table.

Another trip to Bedford then followed and in terrible conditions Ben Ward’s men relied on their power game to leave with an 18-5 win. Two rolling maul tries from Matt Cornish built from a strong set piece were enough to get the win on a night when running rugby was virtually impossible.

A last gasp comeback from Coventry then saw the Trailfinders hit another stumbling block on the first weekend of November. The Green and Whites were 28-14 up heading in to the final quarter, but two late tries meant that the points were shared in a 28-28 draw.

They then headed to Leeds to take on Yorkshire Carnegie, and put down a marker with a hugely impressive 66-13 win. 10 tries were scored in total to leave the Trailfinders in fourth place. They were 24-13 in front at half time, but were relentless in the second half, adding 42 unanswered points as the attack started to shine.

The final match before a rest weekend provided a tricky test against Doncaster at Castle Park. The Knights are always challenging opposition in front of their own supporters, and it would prove to be a tough day at the office for Ward’s side. They trailed 6-3 as half time approached but a crucial try from Andrew Durutalo put them in front at the break. The defence stayed resolute in the second half to hold out the Knights, and then Will Davis and Rayn Smid both crossed the line to confirm a 24-9 win.

In the lead up to Christmas there were three Cup matches as the pool stages drew to a close, and three wins ensured the passage through to the knockout stages in emphatic style.

A huge 80-17 victory against Bedford Blues saw the Trailfinders run in 12 tries, with the half century reached before half time in a relentless attacking display. They headed to Ampthill the following week, and had to complete a dramatic comeback to get the win. Ben Ward’s men were 22-14 behind with just eight minutes remaining, but a Jordan Burns try and then a 79th minute penalty from Craig Willis saw them claim a two point win.

A group decider against Coventry saw the final match of the pool arrive with plenty riding on it, but it didn’t phase the Trailfinders who were dominant throughout. A 56-19 win secured them a Home Quarter Final, with another eight tries registered in front of the home supporters.

It was then back to the league with the crucial fixture against Newcastle at Trailfinders Sports Club, and despite the home side dominating possession and territory it was the Falcons who would leave with a valuable win.

The Christmas break then followed, and the New Year began with a trip to Lady Bay with Nottingham the first opponents of 2020, which would be the start of the winning run.

At a ground that the Trailfinders had never won at it was always going to be a tough test, but Reon Joseph scored two second-half tries in quick succession to secure a much needed 18-10 win.

Ampthill were the next visitors to West London, and they met a rampant Green and White outfit who scored 77 points to register a huge victory. Tommy Bell and Alun Walker both crossed the try-line twice to put the Trailfinders on their way to a second consecutive win.

A local derby at London Scottish followed and another impressive performance would get the bragging rights. Ward’s side had a narrow 16-14 lead at half time, but four tries in the second half saw them run away with a 42-26 bonus point win.

February started with a home match against Hartpury on the opening day of the month, and the good form continued as they cruised to a 59-5 victory. Nine tries were scored, including a sensational individual effort from Levi Davis on his debut which will go straight in to the running as a Try of the Season contender.

The always tricky trip to Jersey followed, in what has become a great rivalry over the last few years. In a topsy-turvy match in the Channel Island sun both sides failed to capitalise on narrow leads, but eventually an Elliot Millar Mills try with just seven minutes remaining secured a memorable 28-24 win.

In the final play of the match Jersey were hammering away at the line, but resolute defence forced an error and sent the travelling fans in to raptures.

Bedford then made the short journey to West London but despite their improved form they were unable to lay a glove on the Trailfinders, who braved Storm Dennis to register a 38-5 victory. Kieran Murphy scored twice to put his side on the way to another bonus point win.

It was then time for the Championship Cup Quarter Final against familiar foes Jersey Reds just two weeks after the league meeting. A tense first half as expected saw the Green and Whites head down the tunnel with a 10-5 lead, but a sublime second half meant that they would stroll in to the semi-finals with a 36-17 win.

The last match in February saw the Trailfinders head to Butt’s Park Arena to take on Coventry, who were unbeaten at home in the league so far this season. That record would however come tumbling down as the West Londoners made it eight wins in a row during a gruelling 80 minutes. First half tries from Pat Howard and Kieran Murphy gave them an 11 point lead at the break, and that wouldn’t be surrendered despite two yellow cards as they held firm to end the block of matches with a 17-8 win in yet more horrendous conditions.

That match proved to be the last of the season due to the Coronavirus outbreak, thanks to everyone who played their part, and see you for 2020/21!